For local naturalist, Sam Fisher, lockdown was spent gaining a greater appreciation of the wildlife to be found in his North Tyneside garden.

For me lockdown largely meant exercise time with children or phone calls to friends and family, so my local patch has seen far less of me than it usually would. Like everyone else, my natural world shrunk dramatically at the end of March but at the same time, its horizons began to expand; for me in my garden.

Since moving to my current house 6 years ago, I have made small changes to the garden to encourage wildlife but nothing dramatic. Relatively speaking it’s better than many but it’s fairly normal. In a typical year, we get bees, some butterflies and a modest range of birds. Until now I thought I was fairly in tune with its rhythms, I knew all its inhabitants.

But lockdown has meant spending a lot more time in the garden or looking out over it. And this has shown me things I did not expect.  More of everything I’d seen before (I didn’t appreciate how important my garden probably is for wildlife). Plus new things I never registered or bothered to know were there.

In previous springtimes, I would watch for bees and butterflies whilst eating breakfast. I would see a few but then continue with my day. This year, sitting out in the garden for longer periods, I have seen that more unusual species do visit, like Orange Tip and Holly Blue butterflies. What’s more they don’t just flit through; sometimes they spend a lot of time here. And far more bees use the garden than I realised, with a constant stream of the common bumblebee species foraging pollen and nectar on the flowers planted for them.

Confinement has also brought more intimacy with the routines of my garden birds. I have encountered new species (Pied Wagtail!) and observed things I would have missed whilst at work, like the arrival of Blue Tits, at 7 o’clock each day, to bathe in the pond. Best of all, I have witnessed things I only glimpsed before. Watching the final Tree Sparrow chick fledge from our nest box is a wildlife highlight I will always remember.

Being in the garden each day has meant smaller wonders have captured my attention. So many invertebrates inhabit or pass through the garden. Every new species of hoverfly, drone fly, sawfly, ladybird, tortoise beetle or solitary bee has presented me the chance to identify and record it, but more importantly, to learn about it, to discover its lifecycle and its needs. And this means that maybe I can help them out in the garden in future.

There are many things I have missed seeing this spring, yet at the same time, there are things I have observed that previously I would have been oblivious to. The restrictions have allowed the time for discovery, diversion and learning but perhaps most importantly, have given me a renewed appreciation of how important a garden can be for wildlife. 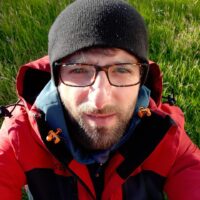 Sam Fisher is a local naturalist who lives by the coast in West Monkseaton, North Tyneside. He spends his free time watching wildlife locally and in Northumberland.