My interest in Crowtrees Local Nature Reserve dates back to a morning early in January 2016.  The reserve is just a couple of miles from home, up the steep side of the Magnesian limestone escarpment which runs down the Durham coast. I’d been running a route through the upper part of the reserve for some time, enjoying the orchids in summer.  On this particular morning, the paths looked too icy for running and I had to choose whether to run somewhere lower down or to ditch the run in favour of a walk with a camera. I’m so glad I decided on the latter. This was the first time I’d explored the woodland and ponds below Quarrington Hill and it was a delight to discover a new wildlife haven on my doorstep. Crowtrees is a SSSI for the combination of blue moor grass and small scabious found on its Magnesian limestone grassland.

Looking at the contours of the hillside around the reserve it’s not hard to work out the origins of the name Quarrington Hill (where quernstones, for milling, were quarried). The stone for St Paul’s Church, which used to stand on the edge of the limestone escarpment, was apparently brought from nearby quarries in the local publican’s cart in the 19th Century and limestone from here was burnt to produce lime for the cement which holds Durham Cathedral together. Quarrying has shaped much of the landscape in and around the reserve.

Snow reveals the site of one of the old quarries below Quarrington Hill, January 2016

At the time of this first visit Hepplewhites, who extract limestone and sand from the adjacent Old Quarrington Quarry, had just been given permission to restart the extraction of sand from Cold Knuckles Quarry above the reserve, to some local dismay.

The Magnesian Limestone escarpment of Cold Knuckles Quarry in the snow, January 2016

However limestone is not being extracted here and, now that sand has been extracted, the area is being backfilled with construction waste and the escarpment reconstructed to allow restoration of the Magnesian limestone grassland.  More on this in later posts.  I’m somewhat sceptical of the efficacy of such large-scale reshaping of the environment but have to admit I get an enormous amount of pleasure every year from the translocated Magnesian limestone grassland adjacent to nearby Thrislington Quarry.

It’s not just limestone and sand which was extracted from Quarrington Hill. Like much of the rest of County Durham, there is coal beneath the sand and there have been three, separate collieries on the site. The first was just a shallow drift mine but the second and third, operating in the latter half of the 19th Century, were deep mines sunk beneath the Permian rocks at Quarrington Hill. Parts of the engine house from the third pit remain visible today.

As well as the Magnesian limestone grassland Crowtrees LNR sports a number of small ponds, the result of mining subsidence. Even on my first, snowy visit it was clear these offer a range of different habitats – some seemed more or less devoid of plant life whereas others were full of Canadian pondweed, flag iris and bulrushes. 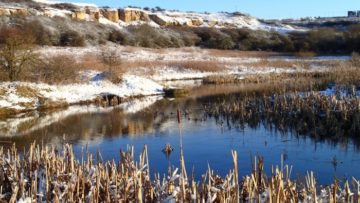 All this was enough to pique my curiosity and send me back to the reserve several times during the summer of 2016 and 2017 and to make my route through the reserve the subject of a monthly plant hunt this year. I started in January, with the Botanical Society for Britain and Ireland (BSBI) New Year plant hunt, walking from my home in Bowburn, up the road through Old Quarrington towards Quarrington Hill, before heading into the reserve, marked in green on the map below.  I walked through the reserve, coming out near Coxhoe, then headed back along the road home – a total of around five miles.

I am using the January 2018 plant hunt finds as a ‘baseline’ and have walked the same route once every month since then, doing my best to identify everything I find in flower.  This has corresponded with me studying the BSBI’s ‘Identiplant’ course, to try and improve my skills, but I am well aware there is plenty I’m missing! My route provides a good range of habitats; roadside verges, some seeded with ‘wild flower mix’, damp areas round the old mine ponds, calcareous grassland and woodland.

Fortunately, the weather on the day I chose this January was very different to my visit in January 2016, but there was little to be seen in flower – daisies, dandelions and white dead-nettle, some yarrow and one sorry looking red dead-nettle as well as the inevitable gorse.  The old saying that ‘When kissing’s out of fashion, gorse is out of bloom’ wasn’t in dispute! 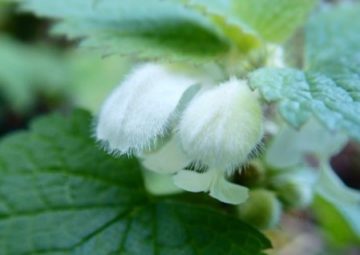 The path I usually take beside the ponds was impassibly muddy without wellies right through from January until June so I often ended skirted round the back on paths made by the Exmoor ponies resident over the winter and spring.  They have an important role in preventing grasses and shrubs from outcompeting other, less vigorous species, although sometimes it’s hard to believe that anything can survive the ponies’ trampling!

Past the ponds, the path wends uphill.   This, too, provides a patchwork of habitats – piles of mine and quarry rubble don’t support enough soil for plants of any size and, consequently, support a diversity of smaller species.  One such patch, looking very uninspiring on my first few monthly visits, is normally a mass of colour in the summer although this year’s dry June has limited plant growth.

Even in January, the clues are there – tiny leaves of thyme, mouse-ear hawkweed, sedge and salad burnet cover the ground and last year’s carline thistles and yellow-wort are easy to spot.

My route then climbs through patchy woodland to the main path and descends to Coxhoe through more open grassland.  Native hedges have been planted alongside the path and are being ‘laid’ in the traditional manner.  Even parts of the final stretch home along the road have species-rich verges and, as the months have passed, I’ve seen the number of species recorded in flower increase from just six in January to well over 100 in June.

By Heather A. Kelly