Of all the treasures in the Great North Museum: Hancock collections, it is often the most nondescript that boast the most interesting stories. Recently, Dr David Horne, who works at Queen Mary University of London, visited the museum to see the Brady collection of Ostracods, in particular, a specimen of Cythere lactea, a marine Ostracod.

For those not familiar with Ostracods (I certainly wasn’t upon writing this), they are incredibly small aquatic crustaceans. The world’s largest species is about the size of a grain of rice, but the vast majority are tiny – almost too small to be seen with the naked eye – and live amid shoals of plankton, or amongst the sediment. Ostracods are a ubiquitous part of the marine fauna in all parts of the world and at all depths. They also occur in fresh water lakes, marshes, caves and ponds from the arctic to the tropics.

Ostracods are an important source of food for many animals, and occur in such vast numbers they have a vital role in carbon cycling. They are also important bio-indicators, as the presence of any particular species in a sample suggests a particular set of environmental conditions – temperature, salinity, pollution etc. This also holds true for past environments – amazingly, ostracods that are found as fossils, or entombed within sediment cores, can tell scientist about how environments have changed over time. Simply put, these small, unassuming crustaceans are the key to a wealth of knowledge relating to times long since passed.

Quite unique, and certainly unusual to look at, the ostracods body, alongside many pairs of swimming legs, is enclosed within two large shell-like valves. Each species has a unique pattern of pits, ridges and pores on its valves and it is these that are used to distinguish between them. Cythere lactea was first described by Brady from an Australian sample, found in sand collected at 17 fathoms, during 1866. The left valve is preserved in the collection and this is a syntype for the species.

The specimen had previously been scanned with a Scanning Electron Microscope (Sem-ed – to use the correct, technical jargon); although there is no record of this actually taking place. As such, the specimen was recently sent for reanalysis. To aid in scanning, it was first coated in a thin film of gold – allowing for images such as those below to be captured. Interestingly, if you look closely, you can see the historic layer of gold – which is peeling away from the surface –  but it is still good enough to show the complex structure of the valve. 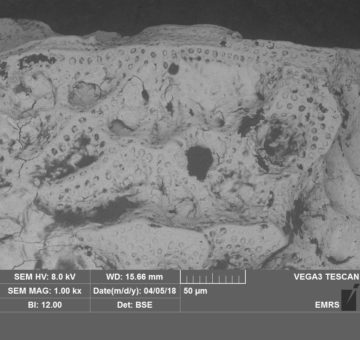 Spider families and their webs

Undergraduate student, Sam Gemmell, takes a closer look at spider webs exploring how you can identify their owner without a spider in sight...

A year of North East ladybirds