Mining Bees are a group of solitary bees that characteristically ‘mine’ into the earth to create their nest burrows. Many are on the wing during springtime and several of these spring-flying species have been submitted to The North East Bee Hunt. These species can appear similar and confusing, but the females can be identified by taking a closer look at their key features. This post takes a closer look at the females of three species of Mining Bee that can be found in your garden. 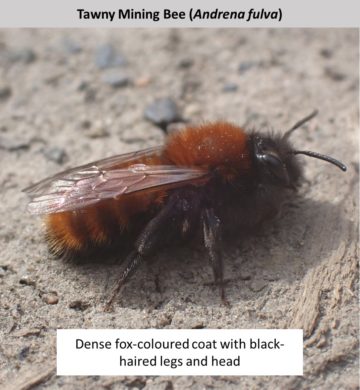 When fresh, the honeybee-sized females have a dense fox-coloured coat that contrasts strongly with the jet black-haired legs. Other key features to look out for are the black-haired sides of the thorax and head.

When not covered in pollen, the hind legs are completely black-haired unlike the next two species of Mining Bee. Over time, the coat can fade and become worn to lose the distinctive fox colour.

Females can be found nesting in bare ground, short lawns and ornamental flowerbeds. These bees leave a characteristic mound of spoil around their entrances that resemble mini-volcanoes. Females can also be found nesting close together in aggregations. 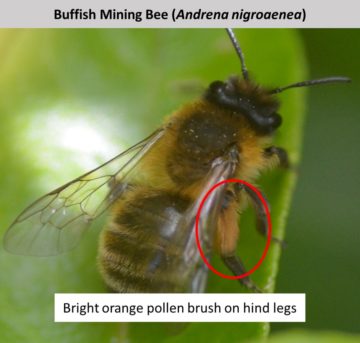 The honeybee-sized females are densely furred with a brown or “buffish” coat. A key feature to look out for is the bright orange brush of hairs on the hind legs.

Without looking at the hind legs, this species is difficult to separate from the next species, the Chocolate Mining Bee (Andrena scotica).

Females tend to nest in bare ground and short turf, and often nest close together in aggregations. The nesting aggregation of Buffish Mining Bees at the Spetchells in Prudhoe is thought to consist of several 100,000 bees! 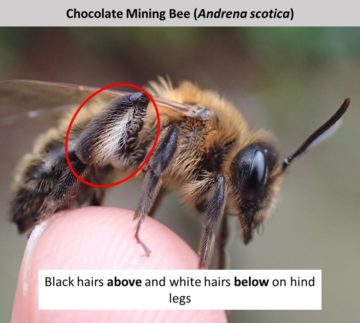 The honeybee-sized females have a brown-haired coat. The common name comes from the coat colour resembling the colour of chocolate. This species looks very similar to the Buffish Mining Bee and the key feature to separate the two species are the hairs on the hind legs.

The Chocolate Mining Bee has black hairs above and a brush of white hairs below, unlike the Buffish Mining Bee who has a bright orange brush of hairs.

When taking photographs of Chocolate and Buffish Mining Bees, it is important to try to capture the hind legs to aid identification.

Chocolate Mining Bees can be found nesting singly or close together in aggregations. Females can also be found using a communal entrance to access their own nest burrows.

If you spot these bees in your garden, don’t forget that you can submit your sightings to The North East Bee Hunt and help to build a better picture of their distribution in the region!