For local naturalist, Terry Coult, lockdown provided an opportunity to study and appreciate a most unusual orchid.

On the 10th of May on my lockdown walk in woodland near my house (NZ183460) I came across a strange pink flower spike which reminded me of Purple Toothwort (Lathraea clandestina), beyond that I had no idea what it was. Image 1.

By the end of May it was looking like an orchid shoot, probably a helleborine but still pink, clearly with no chlorophyll. Anne and Simon Harrap in their book the Orchids of Britain and Ireland mention a form of the Broad-leaved Helleborine, Epipactis helleborine var. monotropoides which lacks chlorophyll and is pink or straw coloured with white or rosy flowers and is very rare. This seemed like a good candidate for my pink plant. Image 2.

In early June, a typical spike of Broad-leaved Helleborine came through adjacent to the pink spike and I waited to see what the pink plant would do. Image 3.

Some further reading found that Broad-leaved Helleborine extracts a proportion of carbohydrate from tree mycorrhizas and can exist in a “mutant, achlorophyllous –“albino” state” obtaining carbohydrates from a source other than sunlight. Possibly representing an evolutionary transition from an ancestral photosynthetic lifestyle to an achlorophyllous, mycoheterotrophic condition, as is the case with Birds-nest orchid (Neottia nidus-avis) (Merryweather,2020). In this case, the plant was at the base of a Silver Birch (Betula pendula).

The mystery of what the plant was, was solved but why did it die immediately the normal Broad-leaved helleborine was eaten. If the symbiosis was with the roots of the tree it grew next too, then why should the loss of the normal plant affect it, was it just a coincidence or is there a further link? 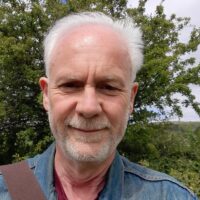 Terry Coult lives near Lanchester in County Durham and is a retired ecologist and a life long naturalist, always learning.  He tends to record wildlife in his local area more than anywhere else, particularly the Durham Wildlife Trust nature reserve at Malton.

Five insects to spot this Spring

Discover five insects to spot this spring as David Raffle introduces some of the intriguing species you could encounter close to home....