June 2018: Before I get around to reporting on this months activities I will summarise some returns of ‘controlled’ birds reported back to me by the BTO. These include the Mute Swan ZJU (named from its colour ring) hatched at Howick last year that has now taken up residence at Amble. A Siskin re-captured by me at Lemmington Hall this April which was actually hatched and ringed at Peebles in July last year; a Chiffchaff originally ringed at Beachy Head (presumably on its way to Africa) in November last year that was re-captured near my home in April this year; and the sadder case of two Goldfinch one ringed at Lemmington in March 2017 that was found dead at Rothbury in April 2018 and another ringed this February that was found dead in March at Powburn. Meanwhile a very late return of information has come from Portugal of a Chiffchaff controlled alive on the 3rd January 2017 that was actually ringed at Low Newton in September 2016! As suspected some of last year’s late (second brood) Barn ‘Owlets’ did not fare too well in the winter with a bird from Warkworth being found dead quite close to its nest site in the spring and another similarly on Holy Island. Another juvenile owl, hatched from Whittingham last year, made the mistake of flying inland to die in the winter near High Bleakhope (in bad weather owls often move more sensibly towards the coast). Finally a female owl that was at least 10 years old was found dead near Howick in April having apparently flown into a fence. One suspects that if she had been younger she would have avoided this obstacle.

Tawny Owls have now finished breeding for the season and one of my reliable female birds from near Longhoughton failed to breed for the first time in 10 yrs; probably indicating she did not survive the winter. However, my 8 yr old Craster female raised two pulli; while other regulars raised four and two at different local locations. The amazing (and arguably amusing) find in a Tawny Owl nest box this year was of a duckling along with a tawny owlet (see pict.)! I though the trainee who called this information down to me from the ladder he was on, was “pulling my leg” but no it was true; there were also two unhatched Goldeneye eggs in the box. We quickly reasoned that the female duck had gone in the box first and laid three eggs but then been displaced by the more forceful owl. The owl had accidentally hatched one of the duck eggs and quite by chance we had discovered the resulting duckling just before it had died from starvation or been eaten! The duckling was rescued and released into a brood of Goldeneye on the water were we hope it was adopted…

At the small Nest Box locations that I monitor every year, occupancy has proved late and very variable; with a high of 40% at Ingram, to only 25% at the Breamish Caravan Site; to practically nil at a wood near Doxford. However, for the first time I have ringed two boxes of Coal Tits (see pict.) this year and one of Willow Tits; including ringing the female birds. Interestingly it’s the older female birds that seem to be most successful at raising broods with a Blue Tit first ringed on the 16/5/14; and a Great Tit from the 13/5/15 being recaptured in their boxes this year. Two Redstarts nested successfully in boxes at a farm near Longhorsley; although a third was predated (probably by a Weasel). A feisty female Nuthatch successfully raised five young from her nest of ‘woodchips’ in a box on the same farm.

My trainees have ringed the first three broods of Barn Owls for this year; two on the coast (were last year they were ringed a month earlier) and one inland near Longhorsley. One of the coastal females is 9 years old (having been ringed herself in a nest at Rock in July 2009) (see pict.). As I said last month productivity will be down on last year but it’s too early to tell how low; as Barn Owls can continue to breed into the summer. Kestrels also made use of one of the boxes near Alnmouth and three health (and noisy) chicks were ringed on the 23rd June (see pict.).

Anyone interesting in ringing is invited to get in touch. Regular ringing starts this month at Howick Arboretum, on Friday and Saturday mornings, and continues into the Autumn (you can just come to watch). 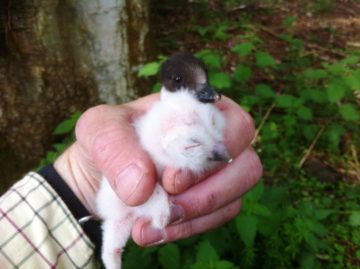