We have been very busy this month finishing off the small breeding passerine (i.e. Perching birds) birds that mostly use nest boxes; and ringing Barn Owls.  However, I will digress to a little foreign news first.  Some of you will remember that I joined a ringing expedition to The Gambia in Africa back in January.  On that trip we ringed some of ‘our’ migrant birds including some Reed Warblers.  One of these birds ringed on the 22/1/20 at Kartong (Z230950 an adult male) has just been found back nesting at Red House Fm., Lincolnshire; having travelled back 4,668 km’s.  When we weighed in Kartong it was only 10.2 g. now its 12.2 g’s: so its doing well!

While we may still find the odd nesting bird in the small nest boxes its possible now to do some simple analysis on occupancy between these different woodland sites:

I have this record going back many years and while the Caravan Site generally does do better than Ingram the disparity has never been this great; both bits of woodland have had very few human visitors this year; and both are on the bank of the River Breamish.  I can add that starting in 2019 there are a lot of wasps at Ingram which do occupy and sometimes drive birds out of boxes.  Both sites have Blue and Great Tits, a few Tree Sparrows and Ingram had a nesting Nuthatch both years.  Recapturing nesting adults is interesting with three at the Caravan Site having been ringed themselves as nestling pulli at the same site last year.  At Ingram one of the nesting female Great Tits was first ringed as an adult in 2016 (so is now at least 5 yrs old) and a fem. Blue Tit was hatched in 2018.   The site at Doxford was not very successful for several years but now just when quite a few of the boxes need replacing the birds seem to have discovered them!  However, I always thought that the oak tree dominated habitat would be particularly suitable for our box using migrants but so far this has not happened and the boxes are occupied by tits.  On the other hand, the woodland near Longhorsley has yielded migrant Redstarts for the last few years.  Redstarts migrate south to winter in the scrub-savanna belt immediately south of the Sahara.  In May 2017 we even had a recovery of a bird that had been ringed in the very same woodland the year before; on its way back; sadly that bird hit a window within 3 km’s of its natal site.  The attached 3 photos show one of this year’s female Redstarts in the hand after being ringed; back at its box returning to its brood; and the pulli which were also ringed by one of my trainees.  The sharp eyed amongst you will notice we had to do running repairs on the next box while it was in occupation; redstarts having a liking for particularly battered boxes.

This years surprise was also initially mistaken for a redstart – with its beautiful blue eggs but turned out to be a much rarer bird.  This was a Pied Flycatcher (which in North Northumberland is very scarce); like its fellow migrant, it travels to Africa although its wintering grounds are not well known.  Some certainly spend time in the Ivory Coast.  They are known to like using nest boxes (especially new ones) but this pair used one designed for redstarts with a large hole (showing it had definitely not been reading the books)!  The male was a particularly vocal and fearless bird giving good views as it came into feed the young immediately after we had ringed them.  See attached pics of the pulli and the male at the box. 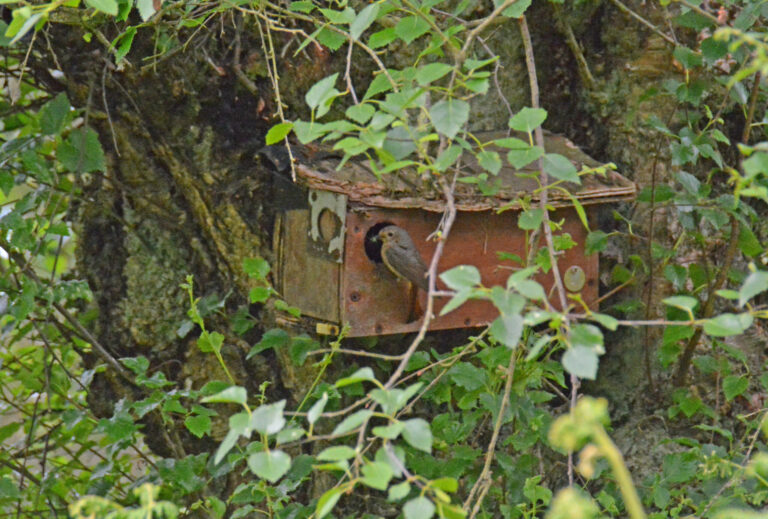 I will report more on the Barn Owls another time but safe to say it’s looking like a good year with high occupancy, following on from the mild winter and exceptionally good spring weather we all experienced.  There have also been some large broods; one ‘8’ near Low Newton and several ‘6’s at locations as far apart as Ilderton, Bamburgh, Boulmer, Lesbury, and just north of Alnwick.  They have also been eating a wide variety of small mammals (not just voles) including mice, moles, half-grown rats and apparently small rabbits!

I will open up the Howick Ringing Station soon but will be limited to 6 people at a session.

An Encounter with a Ladybird Parasite

A short guide to the North East’s grassland ladybirds