Regular readers of this article will know that I operate a Ringing Station at Howick from July into the Autumn.  If you’re interested in reading about the birds at this site then I recommend you get hold of a copy of the recently published 2018 Bird Report for Northumberland, Newcastle & North Tyneside (Birds in Northumbria) because there is a seven page paper titled ‘Howick Ringing Station – The evolution of a place to appreciate and study birds’.  You can go onto the website of the Northumberland & Tyneside Bird Club to find out how to get a copy.  I have also contributed to the classified listings of birds including the Goldeneye and Owls.

At the end of Feb and early March we were out checking on Barn Owl boxes to see how they had survived the winter (we only found one blown out of a tree!), to undertake necessary repairs, to clean out jackdaw sticks and discover which Barn Owls were contemplating breeding ‘early’.  An old horse shed near the coast yielded a pair of birds on the 6th: a new female probably 3 yrs. old and a retrap (already ringed) young male.  The male (GV97838) was from a late nest (13/8/19) on a local old railway line and it was gratifying to see it had made it through the winter from such a late brood; its other sibling had been found dead in the box.   The attached photo shows that the right-hand bird (the female) has a few faint spots hinting at her being a female which was confirmed by her weight of 440g, while the male only weighed 325g.   At another site, not far from Howick both birds looked like classic males (very white and non-spotty) and were of similar weights (360g); see picture.  However, both were retraps and the un-spotty female (GR20048) is an amazingly successful breeder at her more normal site near Boulmer, where she has bred for something like 10 yrs.  The male (GV55857) in the box (his normal box) was a 5 yr. old who we know lost his mate last year.   Interestingly on our third (and last) day of checking owl boxes, we encountered the same female again; back at her normal site (with a different, 3 yr. old, male), and her weight had shot up to 450g!  In all we were able to check 20 odd boxes and found occupancy of mostly pairs of owls in 10.  This suggests a good breeding year on the coast at least – although it must be said that some of the females were below a good breeding weight and so may not breed particularly early.

The other task we did recently was to check on my several small bird box study sites, again cleaning out and repairing boxes for Tits, Tree Sparrows, Redstart, Nuthatch and the like.  None of these small passerine birds are breeding yet but if we don’t clean the boxes out we will just be encouraging bees to take them over and while I don’t resent our native Bumble Bees doing this I do object to the ‘invading’ Tree Bumblebee! If you have not encountered this recent immigrant to the British Isles, then you may not be aware of how aggressive it can be – to people and small birds!  We also put up 20 odd new boxes to replace worn-out ones. 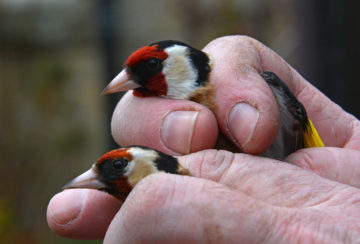 Being pretty-much confined to home recently I have tried some ringing in the garden; although with no Siskins around I confess to being less motivated than I should be.  The morning of the 25th netted 6 new birds including a very splendid male Nuthatch (with russet flanks); and 5 retraps.  These included a 5 yr. old Great Tit.   The 26th was better with 11 new birds and 11 retraps.  The new birds did include several Goldfinches (that often travel and feed with the Siskins but not this year).  The first photo shows two male birds; the lower is less well marked and probably younger while the upper one is older and shows a strong projection of red plumage back behind the eye and dark nasal bristles.  The second picture of a single bird is probably a female (with little red projecting behind the eye and grey nasal bristles) and a definite young (last years) bird, with a very pale tipped juvenile Greater Covert feather obviously showing in the wing.  These are details that ringers learn to look for in the hand and you can sometimes see in the field with your binoculars!  I tried again on the 29th using some traps and caught 7 new birds and 6 retraps.  The new birds included a Tree Sparrow, a Robin and a Blackbird; all clearly female birds showing the early signs of developing brood patches; indicating that they are thinking about breeding soon (particularly the Blackbird).  Included in the retraps were another female Robin and a 5yr old female Blackbird with a more developed brood patch (who probably already has a nest close-by.

Spider families and their webs

Undergraduate student, Sam Gemmell, takes a closer look at spider webs exploring how you can identify their owner without a spider in sight...

A year of North East ladybirds