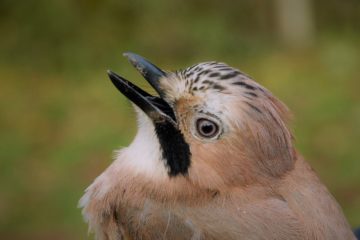 We managed two final ringing sessions at Howick by changing days at short notice to dodge the rain and wind.  On the 2nd we had 29 re-traps and 29 new birds; the re-traps included two Goldfinch’s ringed as adults in 2016.  The new birds included the first Brambling I have seen this year and a Yellowhammer; a new bird for Howick.  On the 9th we caught another 29 re-traps and 35 new birds; including a re-trap Chaffinch originally ringed as an adult in 2015.  Towards the end of the session we caught a very noisy, not to say bumptious young Jay.  Jays are always difficult to handle but one of my trainees got it under control long enough to ring and age it.

This time of year the BTO reminds us all to get our ringing data entered into their database (held in Thetford) and I have now entered and processed all the Barn Owl data for 2019:  My study (of around 100 sites) indicates that this was a much better Barn Owl breeding season than in 2018.  Although numbers were nothing like as high as in the exceptional year of 2017; numbers returned much nearer to the long-term average (circa. 30%) with 36 pairs trying to nest and 32 successfully raising young.

Following on from a mild winter and reasonably good spring weather birds started to nest in April and May.  For the first time ever several of our late May visits coincided with the eggs starting to hatch.  The summer started warmer and dryer than average which was good for returning to nests to ring young but as time progressed it became cooler and unsettled (including becoming wetter) which probably prevented the occurrence of many second broods (only one was recorded) although there was no shortage of food.  This was evidenced by the discovery of several larders of food (dead small mammals) being placed in boxes by male birds in the summer, presumably wanting to nest again.

The average number of eggs laid was 3.9; although three ‘6’s were recorded.  The average number of owlets fledged was 2.5 although two pairs raised five.  92 owlets were ringed/fledged.  Twelve new adult Barn Owls were ringed and 19 were re-trapped; including an 8yr old female that nested again near Boulmer and raised 4 young.  Others near Wooler were 6 and 7yrs old respectively.  A female, originally ringed at Rochester in the Military Ranges that is 6yrs old, was found with two young near Fallodon having not been seen since 2015; and a 7yr old nested successfully again near Warkworth.  Near Longhorsley a 2yr bird seems to have inherited her nest site from her parents; and raised 3 young.  Not far away from a 5yr old, that was originally ringed near Fenton, north of Wooler raised 3 young.

Jackdaws were unfortunately back with a vengeance occupying many owl nest sites.  Because of this troublesome corvid our resident 8yr old female, originally from Dumfries, nested later than usual in a different site (near Craster) but we were able to ring her two young in August.    Close by a 2yr old had two young which we ringed in June, and then moved to a different box to have another two in August (this was our only known second brood).  Unusually a 1yr old female nested (a little late) and raised two young in August near Alnmouth.  Generally, the most successful nests were towards the coast but some of the inland sites showed signs of a recovery in the owl population.   Successful Barn Owl nests were near: Wooler, Doddington, south of Berwick-upon-Tweed, Bamburgh, Fallowdon, Newton by the Sea, Rock, Craster, Howick, Alnmouth, Warkworth, Boulmer, Whittingham, Longhorsley and Netherwitton

Kestrels were again not very evident and only one pair raised four young in an ‘owl’ box near Alnmouth. Tawny Owls did not take over any ‘Barn Owl boxes’ this year but had a reasonably good year ‘swopping’ boxes with our rare breeding Goldeneye ducks.

Thanks are due to all those who have helped with this project; and those organisations and individuals that have donated money for the making of boxes etc.

Ornithologist, Phil Hanmer, shares an May update summarising bird monitoring across Northumberland throughout the month....

Get to know your Red-tailed Bumblebees

Local naturalist, Charlotte Rankin, provides a short guide to the red-tailed bumblebees that you could spot across the North East....