Ringing at Howick Arboretum continued this month despite the troublesome weather.  On the 1st   22 new birds and 17 retraps were processed.  Two very young Chiffchaff (warblers) were captured and a single Goldcrest.  The retraps included a moulting adult Coal Tit ringed (as an adult) in 2014.  On the 8th, numbers picked up with 52 new birds and 24 retraps; including migrating Blackcaps (feeding upon berries), Chiffchaffs and lots of resident tits, chaffinches and a ‘rare’ Greenfinch.  There was also a rather interesting juvenile Bullfinch – undergoing its post-juvenile moult and showing its new ‘reddish’ feathers for the first time (see photo) and a Treecreeper; which we could only age because it had previously been ringed as a juvenile in 2017.  The below photo shows its very long claws used for scrambling around tree branches. 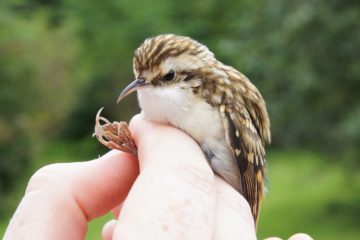 The 15/9/18 proved to be a very busy morning with 96 new birds and 26 retraps processed.  An early Great Spotted Woodpecker was another from the brood that was hatched very locally; this was followed by a Goldcrest also probably a local bird (as there has been no evidence of a coastal influx of migrants this year).  The second Whitethroat of the year was ringed around 9:00 and quickly followed by several Blackcaps; along with resident Coal Tits and Goldfinches.  The real excitement began at 11:30ish when we captured a foraging flock of Mistle Thrush; made up of 10 juveniles and 1 adult bird.  These birds are rarely captured because they mostly fly ‘high’ but they were seeking berries (and left some of these in the nets) which are ripening profusely in the arboretum.  This gave some of my trainees their first close look at these splendid birds with their ‘olive-grey-brown’ colours which are very different from the warm browns of our garden Song Thrush (see photo of two birds).  Along with the thrushes, there was a single juvenile Blackbird; have you noticed how few Blackbirds there are around this year? (Blackbirds raised few young this year as they started nesting later than usual after the cold spring and then found locating food very hard in the hot dry summer).  The rest of the morning was spent processing tits and a great many Goldfinch. 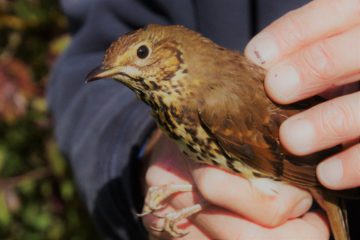 With a slightly late start, due to adverse weather, on the 22nd we captured 35 new birds and 9 retraps.  The first was an adult female Nuthatch, probably the parent of the several juveniles we had ringed locally.  There were still a number of Blackcaps and Chiffchaffs in the area which entertained us until another flock of thrushes came in.  Seven Mistle Thrushes were captured (all juveniles) along with a single Song Thrush.  I have included a photo of this bird with its ‘warm brown tones’; as a comparison with the larger greyer Mistle Thrush.  Finally, the weather lets us ring on the 28th when we captured 38 new birds and 8 retraps.   Quite early in the morning Bullfinch and Thrushes (Mistle and Song but no Blackbirds) were investigating the berries and several were captured.  Blackcaps (carrying lots of fat) on migration also stopped off to feed.  Later three very juvenile Chiffchaffs were captured (clearly from a late brood) a for the first time this year a flock of Long Tailed Tits encountered a net. 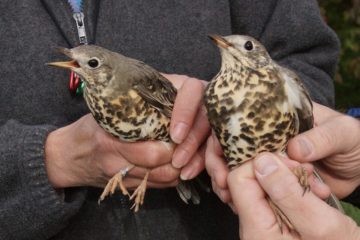 Anyone interesting in ringing is invited to get in touch.