Home Birds An update on the Farne islands Arctic terns

Since 2015, The Natural History Society of Northumbria (NHSN) has worked on a ground-breaking project tracking the migration of the Arctic Terns nesting on the Farne Islands, Northumberland.

In the spring of 2015, in partnership with Newcastle University and the National Trust, the project leader, Dr Chris Redfern of NHSN, fitted each of 28 breeding adult Arctic Terns with a small, electronic geolocator attached to a plastic leg ring. The success of this project was dependent on a number of factors: that the devices would not impede or hinder the birds or prevent natural behaviour, that the devices would remain attached and continue to function, and that sufficient numbers of the birds would return the following year and could be recaptured to recover the geolocators and download the data. The 2016 breeding season was therefore eagerly awaited to see if the geolocator birds would return; however, the team’s worries proved unjustified and data were recovered from a total of 23 devices.

Thanks to the generosity of sponsors, NHSN was able to continue the research into Arctic Terns in subsequent years. In total, 25 geolocators, costing £120 each were purchased using funds raised by a dedicated appeal and the tagging programme was resumed during Spring 2017.

Now, during the 2018 breeding season, NHSN is pleased to report that researchers have been able to recover 22 of the 25 geolocators fitted during the previous breeding season, with an additional tagged bird present on site but evading capture so far – highlighting a return rate of 92%! All of the data loggers recovered have remained in good working order and, once fully analysed, the data from these will greatly increase our understanding of Arctic Tern migration strategies.

Of the devices recovered so far in 2018, nine were from birds tagged initially during 2015 and retagged again in 2017. In addition, both members of 7 pairs were tagged in 2017 and of four confirmed pairs this year, two have produced clutches of three eggs this Spring. The normal clutch size of Arctic Terns is two eggs and this is nice additional evidence that the geolocators do not interfere with the normal activity of the tagged birds.

“We are delighted to have recovered a high proportion of the geolocators this year and that all have functioned well. With the funding provided by NHSN members and the excellent quality of devices provided by Migrate Technology, we are able to follow the migration routes and wintering areas of our Arctic Terns in unprecedented detail” 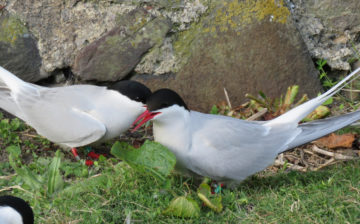 A pair of Arctic Terns, each tagged with geolocators in 2017, back together on their nesting site in the 2018 breeding season.