A wise old owl sat in an oak,

The more he saw the less he spoke,

The less he spoke the more he heard,

Why can’t we all be like that wise old bird?

I spotted this book in the Hancock library earlier in the year and to be honest what first caught my eye was the artwork. I may be useless at drawing birds myself but I certainly appreciate beautiful ornithological drawings when I see them and Beci Kelly’s illustrations throughout the book are indeed charming. Another reason I picked up this book was due to its size, it’s pretty small; at 88 pages including illustrations, it’s a nice accessible read and just the right size to hide away with on a rainy afternoon.

When I first decided to write this review I was worried I would merely be saying what any other book review would say but people have different interests and what one person may find fascinating in a book is not what may catch the eye of another person. For example, for me personally one of the snippets of information in this book I enjoyed was finding out that owls are old, really old. There is a fossil record of an owl, Ogygoptynx wetmorei from approximately 58 million years ago and the first fossil record of an owl in Britain comes from approximately 1.7 million years ago (the Pastonian stage). As someone from the North East I was also intrigued by the story of a Tengmalm’s owl (Aegolius funereus) being recorded in Morpeth, Northumberland in 1812. Upon further investigation, I found out Prideaux John Selby had this exact bird in his collection and had included it in his illustrations of British Ornithology which I found in the NHSN library. Below is the plate of the Tengmalm’s owl from Morpeth: 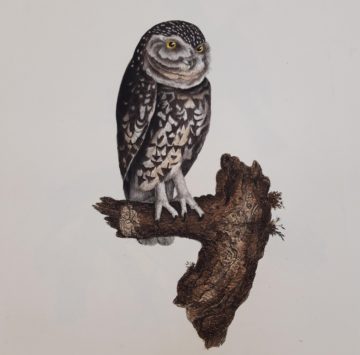 I personally wouldn’t say it’s one of Selby’s best pieces but I was pleased nonetheless to find out a bit more about this rare visitor to our shores. The birders amongst you may recall earlier in the year a Tengmalm’s owl was spotted in Shetland, a place that had last recorded the species in 1912.

The main section of the book details our native owl species and includes information on their appearance, behaviour and breeding. What separates it from an educational text in this case though is Lewis-Stempel includes myths and stories about each species. One of the stories that stuck in my mind was the discovery of a communal roost of 116 short-eared owls in Norfolk in 1972. I can’t imagine what it must have been like to be the person who discovered that mind-blowing sight and wondered would a sight like this ever be witnessed again. On the subject of events from the past, there are a number of examples throughout the book where I wondered if I was reading about events already consigned to history, never to be seen again. This is largely due to the ongoing decline of these beautiful birds which Lewis-Stempel regularly reminds the reader of.

The final part of the book reveals the long history of humans and owls. I found this the best part of the book as Lewis-Stempel tiptoes through the different beliefs and superstitions cultures and societies around the world have had about the owl through history. Unfortunately for the owl one of the recurring themes we see in different cultures is that of death or bad luck. Due to its night-time escapades and cries in the dark the owl tends to be seen as a warning of some awful tragedy on the horizon. However, that isn’t the case across all cultures, some have viewed the owl more positively through history, seeing it as a sign of good fortune or health. In Ancient Greece, for example, they believed an owl touched or consumed would cure drunkenness passing the sober look of the owl onto the person.

If you, like me, have admired the beauty of the owl without knowing much about the species and it’s background then this book is a nice introduction. You can find it in the Natural History Society of Northumbria Hancock Library along with a variety of other bird books to enjoy.

A Ringers Year: Willow Tits, Marsh Tits and the shenanigans of swans