Home Notes from a Lockdown Naturalist House martins: A particular nest in Morpeth 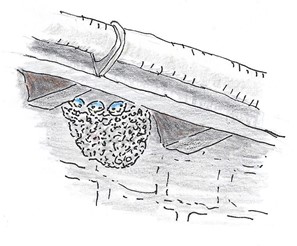 We have lived in our house in Old Bakehouse Yard, in the historic centre of Morpeth, since 1976, but never until 2019 did we have house martins nesting here, one nest at No 2 and one next door at No 3.  Because house martins are losing numbers nationally, it seemed particularly important that they were moving to a  new site.

In 2020, after quite a late arrival, they returned, constructing a nest outside my bedroom window in the same place as in 2019.  This being the year of the Lockdown, I was at home all the time, able to observe through my two south-facing bedroom windows, and leaving my bedroom curtains open during the long hours of daylight.  In the daytime, I observed them from the garden.

Every day during April, I had been looking out for them.  We were sitting outside at 8.30 am, enjoying breakfast in this unusually warm May morning.  Out of the blue, literally, pirrip pirrip, a flashing group of house martins were diving through our garden, sweeping, swooping up to nest sites under the gutters of our terrace house.  Flying up to a site, zooming away, flying back, with their chorus of pirrips.  Ten, twenty, who could say?  They move so quickly.  Their flight showed their excitement at arriving after their long journey from Africa.

Saturday 9 May – Nest site is chosen

A couple have chosen to nest outside my bedroom window, at the same site as last year.

Tuesday 12 May – Semi-circular nest base

At around 5.30 am, a group arrived, doing their dramatic “fly-by”, whereby they circle around at great speed in the area in front of the house.

The pair has begun the nest construction.  Using binoculars, I’ve been watching them bringing beaks of mud pellets to the nest site and sticking them onto the wall, creating a semi-circular outline.

Tuesday 19 May – Two colours of mud

The nest is well developed with two different colours of mud having been used.  This May is very dry, and thus sourcing mud must be taking some effort.

The two house martins at “my” nest, now well-formed, were canoodling, pecking sharply and affectionately at each other’s faces.  They paid no attention to me watching through binoculars.

I spent an hour observing nest building.  Two of them were bringing in mud pellets and at other times grass.  I saw one bringing in a lovely white feather which unfortunately it dropped.  I noted five layers of differed coloured mud pellets.

Over the next few days, the pair would intermittently work at nest building, and then off they would go for a day or so, causing me to worry that they were abandoning their nest.  The nest is nevertheless becoming huge.

All day, not two but three house martins were very active.  The nest appears to be completed.  One, perhaps the female, is peeping out, fluttering and fidgetting.  Two others are regularly approaching the nest, presumably males.

This was the day of drama.  The group fly-bys commenced at 5.50 am.  The birds were flashing by with sunlight on their wings, in and out and round and round, at super speed, with lots of pirrips.  The wider group is taking great interest in “my” nest.

At midday one was mainly in the nest, but kept going in and out.  Two were circling around the nest.  At one point, one flew out and two flew in.  Mysterious. This went on all day, and seems it must be the mating event.

I am assuming that eggs have been laid.  Over the next two weeks, I noted the extraordinary sound of constant cheeping in the nest.  Do parent birds “talk” to their unhatched young?

This is the date I had calculated for hatching, based on two weeks after mating on 23 June. 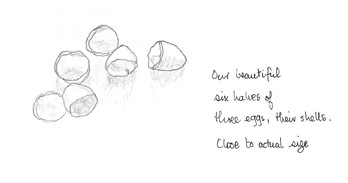 At midday, this is exactly what I’d been hoping for – a pair of half-egg shells on the ground appeared below the nest.  A little later, another two halves were on the ground.  By 4.30 pm, a third pair of halves appeared.  Thus I know that three tiny hatchlings are in the nest!

For one hour, between 1.50 and 2.50 pm, I observed 34 nest visits with the parents bringing food to the young.  Assuming two birds, this means one flight per minute per bird,

At 5 pm, the sun came out warmly.  Then two little heads peeped out to be fed.  I could see their wide-open yellow beaks demanding food, with much cheeping.  A few days later, I saw three little heads together, which is reassuring.

Birds from the wider group are encouraging the nestlings to leave the nest.  They sometimes fly-by close to the nest, but although the youngsters opened their big yellow beaks expectantly, the “cousins” didn’t feed them.  “Time to come out yourselves”, they seemed to be saying.

This is the day when the youngsters took their first flight.  From 7.30 am, the wider flock, 20 or 30 adults, were doing intense fly-bys, right up to the nest, in and out of the nest.  It is impossible to tell which are the parents.  There was much pirripping and cheeping, and fluttering nearby.  Then the whole group would disappear, shortly to return.

There was so much activity that it was hard to tell if the youngsters had flown.  At 8.05 am, silence.  The miracle has happened.  Yet they came and went into the nest during the day, the adults still feeding the young.

The youngsters are still sometimes in the nest, with the adults feeding them.  Thus it seems that although they have learned to fly, they are still relying on the adults to catch their food.

This was the last date that I observed action at the nest site.  There was no return to the nest, even for roosting.  There are regular activities at other nests in Morpeth, and so I am assuming that “mine” are integrated with the wider group.  There are still frequent fly-bys past our house.

Extraordinary!   At 8.00 am, a big fly-by took place right outside my bedroom windows.  All morning, half a dozen or more were high-flying around, pirriping pirriping, and visiting “my” nest.  Sometimes they went in the nest and would stay in for ten seconds or so.  What are they doing?  Is it a good sign for next year?

I do hope they’ll return.  I miss their cheerful pirrip pirripping, and the company of the cheeping family in the nest.  But it is good to think they are freely on their way to Africa while we land-lubbers are locked down at home. 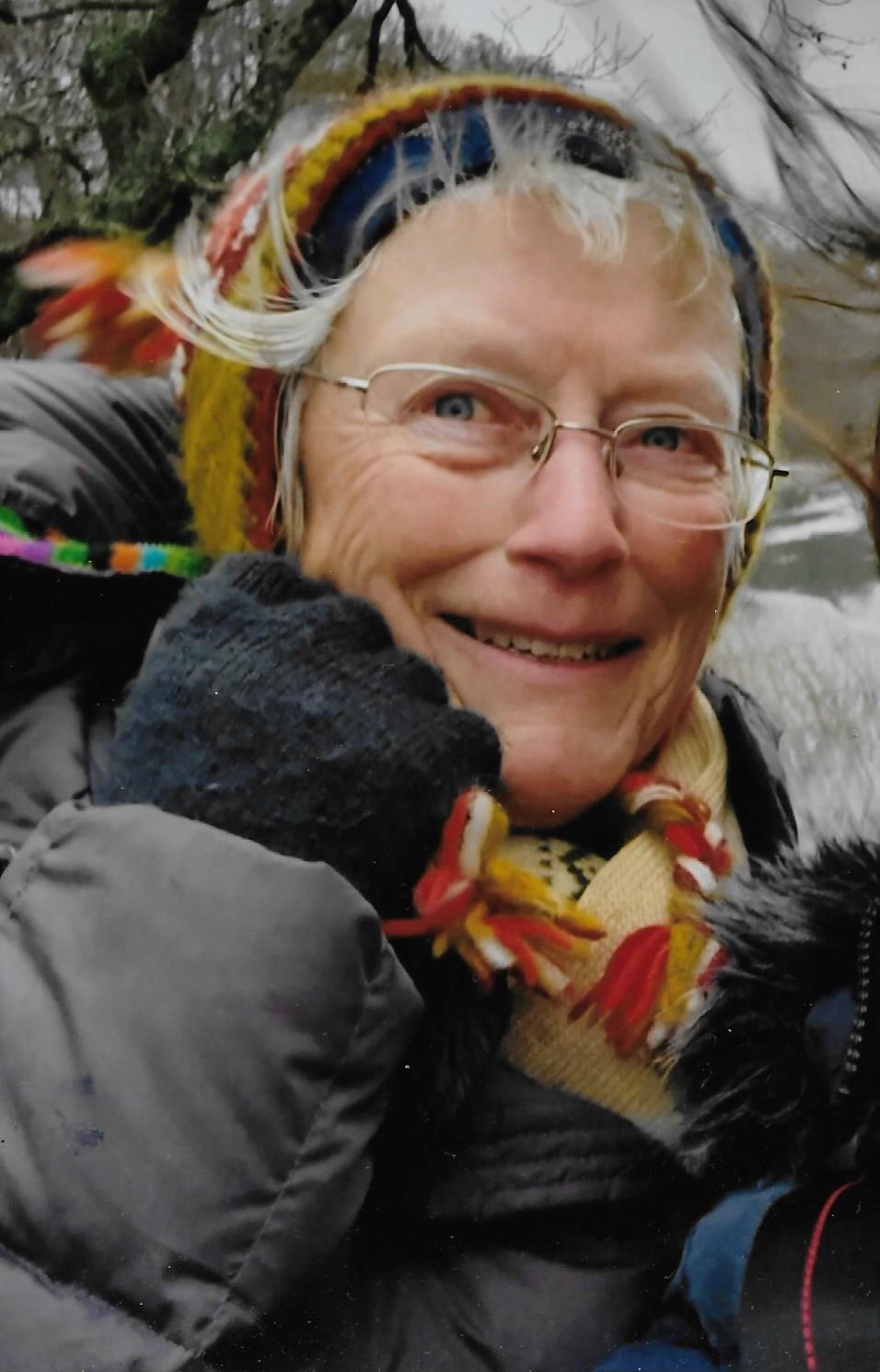 Bridget Gubbins has lived in Morpeth since 1976.  A mother of four and former primary school teacher, she was an environmental campaigner at the heart of saving Druridge Bay from nuclear power stations and sand extraction between 1981 – 1996. Bridget has worked as both a press director for a renewable energy company and as an English language teacher for asylum seekers and refugees. She is the author of local history books based on Morpeth and is currently local co-ordinator for the Cocwudu woodland project, as well as a newbie bird watcher.

For NHSN member, Moira Gray, lockdown provided an opportunity to investigate the comings and goings of Fenham's urban hedgehogs...

Nature Notes from a Gosforth Garden

For naturalist and long-term NHSN member, Bob Wilkin, lockdown provided an opportunity to immerse himself in garden wildlife and appreciate the value of Newcastle's wildlife corridors...

Our next Lockdown Naturalist entry comes from naturalist and seabird scientist, Daniel Turner, at Tynemouth...
We use cookies to ensure that we give you the best experience on our website. If you continue to use this site we will assume that you are happy with it.Ok