Home Notes from a Lockdown Naturalist Lockdown and Little Terns 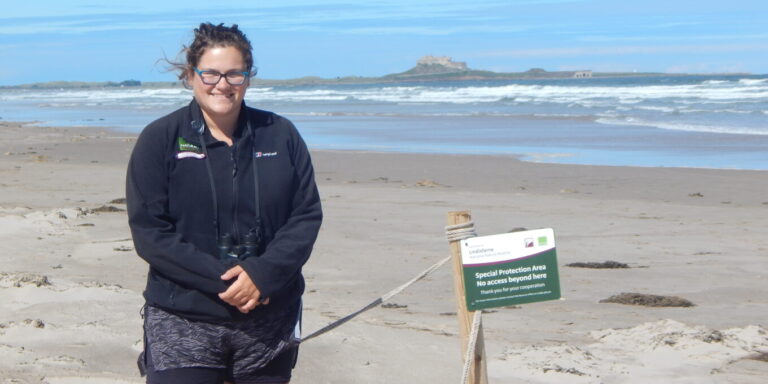 My name is Sally Reay and this season I have been working for Natural England as a Shorebird Warden at Lindisfarne National Nature Reserve (NNR), hired to protect and monitor key species such as Little Tern, Ringed Plover and Oystercatchers that breed across the reserve.

I’ve had a passion for wildlife and birds in particular since I started bird ringing at the age of 17 and following a 5-month residential volunteering stint on the Isle of May NNR after university. I knew that working on nature reserves was the career path I wanted to follow.

Covid-19 and the resulting lockdown in the UK have had a massive impact, not only in Northumberland but across the whole of the UK with many seasonal posts such as mine being cancelled or postponed. I was lucky enough to be hired for the summer holidays, due to the Little Terns having a late breeding season, and because of the great increase in the number of visitors at the reserve this summer. This is most likely due to a boom in “staycations” and people being unable to travel abroad. This proved essential as we were able to keep the late breeding birds and chicks safe, with the final chicks not fledging until as late as the 20th August.

Last year I was working at the Long Nanny shorebird site as an assistant ranger for the National Trust, where we had a record year with 54 Little Tern chicks fledging! Unfortunately this year they were unable to cover the site 24/7, and seeing first hand how essential that was to deter nighttime predation and to keep the public and dogs at a distance it will be interesting to see how successful the birds were this season.

Before my contract at Lindisfarne started in late July, I was lucky enough to be able to visit Gosforth Nature Reserve regularly as it’s only around the corner from me and was able to get my tern fix from the Common Terns that breed on the platform there. Unfortunately, I have missed out on a lot of bird ringing over the spring and summer, with BTO guidelines restricting trainees from taking part in any ringing. I was also supposed to take part in a ringing course down in Icklesham, where I was up for review to get my C-permit, so this will now be a target for myself next year.

My next steps see me in another short term contract with Nature Scotland at Tentsmuir NNR, again to help with an increase in visitor numbers, and in preparation for the oncoming seal pupping season.

If another wave of Covid-19 hits the UK, I hope that organisations may be able to work with social distancing measures to be able to put staff in place to protect breeding birds such as the Little Tern, which are so greatly affected by human disturbance and interferences.

Sally Reay is from Gosforth, Newcastle, and studied Zoology at Aberystwyth University. Her love for animals came from spending so much time at her grandparent’s farm as a child, while her parents were also a big factor in making sure she got to experience the beautiful nature her local area had to offer, with plenty of family holidays up the Northumberland coast and annual trips to Wallington Hall and her favourite National Trust property, Cragside.