Home Notes from a Lockdown Naturalist Lockdown on the Allotment

Like many allotment-holders, we’ve felt pretty lucky during lockdown. Perhaps we’re even luckier: our plot is in an old, sprawling site near the centre of Wallsend, and on the other side of our fence is a large triangle of mature crack willows and sycamores, through which the burn flows. Garden shrubs, planted by plot holders past and present, vie for space with primroses, foxgloves and generous deposits of old bricks. This relatively undisturbed space is a valuable urban retreat for wildlife – as well as the odd feral cat.

It’s no garden of eden. Underneath the nettles is rubbish of all kinds, stratified by age. As well as the usual glass bottles, knackered buckets, and endless compost bags, I’ve pulled out radios, bicycle wheels, ancient cattle bones and a widescreen TV. Worst was the collection of a dozen weedkiller bottles which had been tossed contemptuously into the river. Some attitudes are ingrained over generations: give nature an inch and it’ll take a mile.

But taking on an allotment can be conflicting even for a confirmed wildlife gardener. It’s hard to bring yourself to pull out the creeping buttercups when you’ve seen them alive with pollinators. I even struggle to kill snails, although I do place them on the brick path, hoping that the song thrushes will deal with them when I’ve turned my back.

The thrushes have been a highlight of my early morning lockdown visits. One grey morning I arrived to find that a drama of some kind was playing out in the plot – there seemed to be thrushes everywhere, flying agitatedly from fence to fence. What had I interrupted? What had turned its tail on my arrival? It wasn’t until a few hours later that I found the dead fledgling next to the compost bin – a pristine little thing, eyes and beak peacefully closed, and no obvious signs of injury.

On another morning, brighter and stiller, a blackcap took umbrage at my early visit – chacking at me from the willows, and following me into the plot to continue its admonitions from the apple tree. I’d never seen one so close – the lovely slate nape and sooty crown – and I couldn’t help enjoying the attention, letting the poor chap work out his frustrations for a while.

It may be that the pandemic is a taster of the change and disruption that will come as the ecological crisis deepens. But if we can get past the old idea that nature must be brutalised into submission, there might still be hope. I’ve often stayed in the allotments until dusk, when the honeysuckle in the hedge reaches its fragrant peak, and when the cow parsley and buttercups along the pathways attain an almost supernatural glow. The song thrushes take their positions at the height of the willows and the bats come out to hunt. At these moments you have to remind yourself that you’re in industrial North Tyneside, ten minutes walk from where the ships were launched at Swan Hunters. 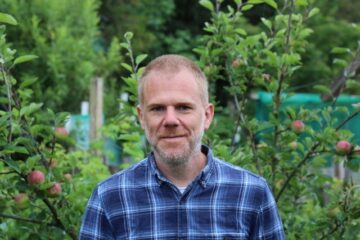 Rob Galpin is a wildlife gardener, amateur naturalist and permaculture enthusiast living in Wallsend with his partner and three children.