Thank you again to everyone who has taken part in the North East Bee Hunt. Your records are bringing to light new information about the North East’s bees and have now taken us to over 900 records!

Below, Charlotte Rankin highlights your records and observations over the past fortnight. 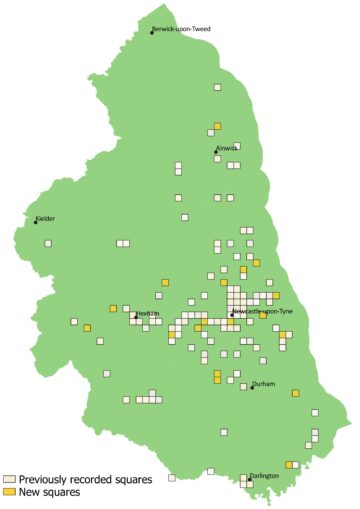 Across the region, North East Bee Hunt participants are putting bees on the region’s map by submitting records of their sightings. A fantastic 900 records have been shared so far of over 20 bee species, including bumblebees and solitary bees. Over 130 people, stretching from Bamburgh to Middlesbrough, have taken part in the Bee Hunt so far, and the pictured map below shows where bees have been recorded. An interactive map on the Bee Hunt’s iRecord page also allows you to explore what bees have been found so far near you.

Many bumblebee nests are well underway now and some nests that established early in the year have now reached their end; males of Early bumblebees (Bombus pratorum) and Tree Bumblebees (Bombus hypnorum) have been submitted to the Bee Hunt, marking the end of their natal nests. The last remaining spring-flying solitary bees such as Red Mason Bees (Osmia bicornis) – now worn and sun-bleached – may still be hanging on; though the activity at your bee hotels will soon be taken over by new visitors such as Leafcutter bees (Megachile species). Unlike Red Mason Bees, female Leafcutter bees use sections of leaves to line their nests, so look out for any tubes lined with cut leaves or for neat semi-circular holes cut out of your roses. More information on Leafcutter bees and how to identify them can be found in a recent blogpost.

While the target bumblebee species, Tree Bumblebee (Bombus hypnorum) and Red-tailed Bumblebee (Bombus lapidarius), will be on the wing for the duration of summer, the Bee Hunt welcomes and encourages all bee sightings. To help you identify other bumblebees you are likely to encounter, there is a handy online crib sheet by The Bumblebee Conservation Trust. If you have spotted a bumblebee with a white-tail, ‘Getting to know your ‘white-tailed’ bumblebees’ can help you to identify the species. If you are unsure of what bee species you have encountered, please do share your images on the Facebook thread.

A new bee species for this past fortnight is the Fork-tailed Flower Bee (Anthophora furcata). Resembling a small and zippy Common Carder bumblebee, this is a solitary bee particularly fond of plants from the Dead-nettle family such as White Dead-nettle and Hedge Woundwort. Females nest in dead wood and the males are most often found patrolling around a particular patch in search for a female to mate with. It is definitely worth keeping an eye out for this species while it’s on the wing for the next couple of months.

Another exciting record this fortnight does not involve a bee, but a wasp that depends on bees! Females of the solitary wasp Sapyga quinquepunctata sneak into the nests of Mason bees and lay their own eggs within. Their resulting larvae then feed upon the host’s egg and pollen stores. This species has very few records in the region, but do keep a look out for it around your bee hotels.

The map shows the distribution of records that have been submitted to The North East Bee Hunt. A number of records have been submitted from new areas though there are still plenty of gaps that can be filled! A huge thank you to all Bee Hunt participants who are sharing and submitting their bee sightings. Collectively, we can build a greater understanding of where bees are and how they are doing in the region.