Thank you again to everyone who has taken part in the North East Bee Hunt. Your records are bringing to light new information about the North East’s bees and have now taken us to an outstanding 1200 records!

Below, Charlotte Rankin highlights your records and observations over the past fortnight.

This fortnightly update marks the first three months of the North East Bee Hunt, and what a busy and buzzy three months it has been! To date, around 150 recorders across the region have submitted nearly 1200 records. All five focus species have been sighted, and while the spring-flying focus species have finished for the year, Red-tailed and Tree bumblebees are still on the wing to record. The Bee Hunt encourages all bee records, and a total of 31 species have been recorded, some of which have very few records in the region. This is such a fantastic collaborative effort by Bee Hunt participants and showcases what can be found on our doorsteps. The distribution of these sightings can be viewed on the map below, while you can use this interactive map to view records near you. By putting bees on the region’s map, we can help to monitor their status and inform their conservation. 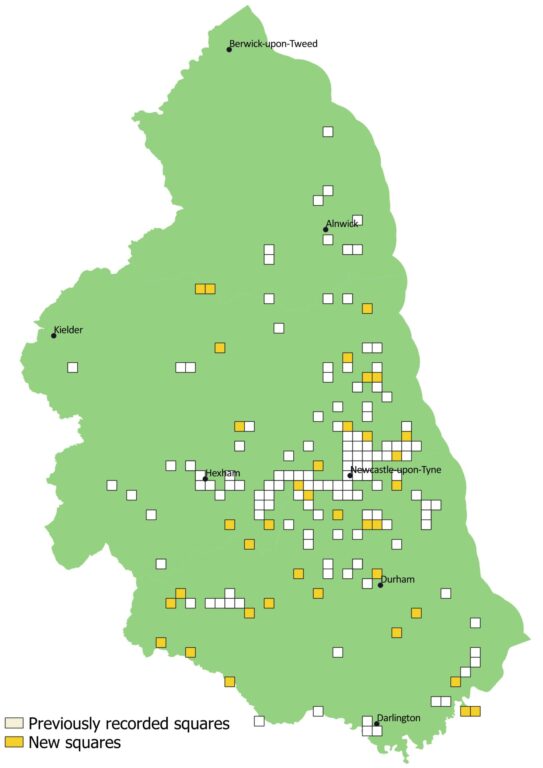 While the spring-flying bees have packed up their action for the year, bee antics have been succeeded by summer-flying solitary bees such as Leafcutter bees. Bumblebee nests are still keeping busy, with some nests now reaching their peak or coming to an end. One current hotspot for bee activity is Bramble. The recent rain appears to have spurred on the burst and bloom of Bramble; while often dismissed as a garden nuisance, it is such a fantastic forage source for bees and is a real hotspot for activity at this time of year.

Male bumblebees, particularly those of Early, Red-tailed and Tree, have been sighted on the wing this fortnight. Often seen on open flowers such as Thistles and Knapweeds, the males spend of most of their days fuelling up and searching for new queens to mate with. We have also received queries about male Tree bumblebees appearing aggressive and ‘swarming’ outside nests. While this can appear alarming, it is not an aggressive behaviour; rather it is males dancing around waiting eagerly for new queens to emerge!

While the emergence of males and new queens marks the end of nests, you may have experienced a flashback to spring with recent sightings of fresh queen bumblebees along with their booming buzzes. In late summer, these new queens will fatten up to overwinter until spring; however, in more recent years, new queens from early nests may decide to establish a summer nest rather than overwintering. Though a more common observation in the south, a fresh queen Tree and Early bumblebee have been sighted with pollen loads this week – a sure sign that these queens have settled on a place to nest for the summer!

This update also marks two weeks since the re-opening of Gosforth Nature Reserve for NHSN members. With an abundance of flowering plants, both the meadows and the garden of Lake Lodge are proving popular with the bees and other flower-visiting insects. As part of the North East Bee Hunt, Reserve Warden Paul Drummond, Comms and Engagement Officer James Common and volunteers have recorded a total of 11 bee species at the Reserve so far. Some of the sighted species, such as the whizzy Fork-tailed Flower bee, appear to be the first formal records for the Reserve. James has also sighted a species of ‘plasterer’ bee (Colletes species), a group of small solitary bees that secrete cellophane-like material to line their nests. With a particular fondness for Ox-eye daisies, these small bees will certainly be enjoying the meadows at the Reserve.

Looking at the distribution map, a number of records have been submitted from new areas in the region this fortnight; though there are still plenty of gaps that can be filled! So far, over 700 of these records have been expertly checked and verified by iRecord verifiers. A huge thank you to all Bee Hunt participants who are sharing and submitting their bee sightings. If you have sighted a bee and are unsure on its identification, try this bumblebee crib sheet by the Bumblebee Conservation Trust and the online photo guide by leading expert Steven Falk. Please do also get in contact with us via nhsn@ncl.ac.uk or social media, and the NHSN Bee Team will try their best to help. Collectively, we can build a greater understanding of where bees are and how they are doing in the region.

Five insects to spot this Spring

Discover five insects to spot this spring as David Raffle introduces some of the intriguing species you could encounter close to home....