As we enter July, gaps remain in our knowledge of bee distributions across the North East. Please take a look at this interactive map and help us fill any gaps present in your area.

Over 200 records have been submitted to The North East Bee Hunt this fortnight, bringing the total so far to a fantastic 1,400 records from 150 recorders across the region. A total of 31 species of bumblebee and solitary bee have been recorded, some of which have very few records in the region such as the spring-flying Hairy-footed Flower Bee (Anthophora plumipes) and Bilberry Mining Bee (Andrena lapponica). To date, the ‘top 5’ most recorded bees of The North East Bee Hunt are the Tree Bumblebee, Red-tailed Bumblebee, Common Carder Bumblebee, Early Bumblebee and Red Mason Bee. Many worker bumblebees are being recorded on the wing and this fortnight has brought the Bee Hunt’s first record of a Plasterer Bee (Colletes species), a solitary bee group that use cellophane-like material to line their nests.

The distribution of North East Bee Hunt sightings can be viewed on the map, with orange squares showing new areas for records this fortnight. Can we generate more records in North Northumberland or South of the Tyne this fortnight? By putting bees on the region’s map, we can build a greater understanding of where bees are and how they are faring in the region. All records are checked and verified by experts and made available to inform monitoring and conservation efforts. 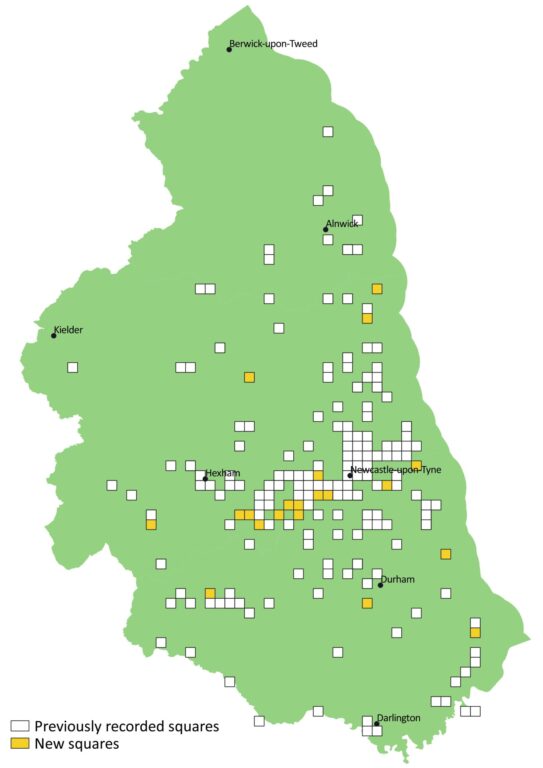 What to look out for this fortnight

July is a busy month for bees and there is plenty of bee action to observe. Here are four species you can look out for and record this fortnight.

Marked by the appearance of males and new queens, bumblebee nests that established earlier in the year are now coming to an end. During this past fortnight, a number of male bumblebee records have been submitted. The males Red-tailed bumblebees (Bombus lapidarius) and Early bumblebees (Bombus pratorum), can be easily confused. Each sporting a red tail, a yellow ‘moustache’ and bands of yellow hairs, these two species appear very similar but there are key differences to look out for. In general, male Red-tailed bumblebees are more elongate, less fluffy and less extensively yellow than male Early bumblebees. 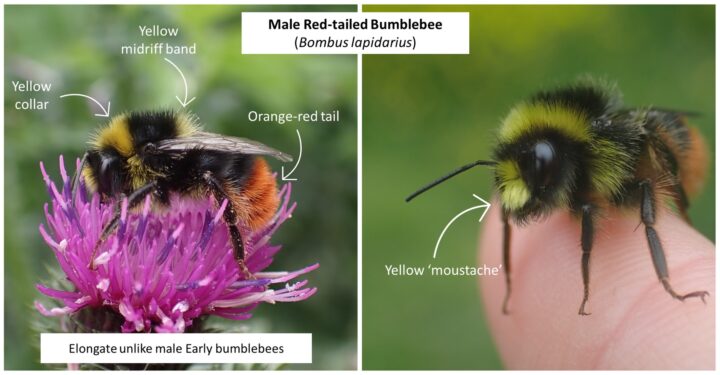 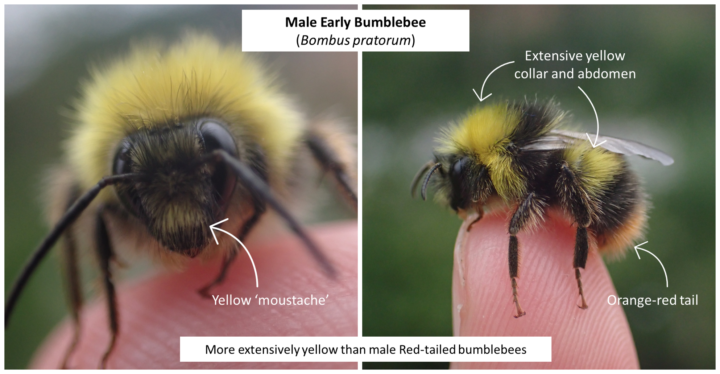 Leafcutter bee activity is well underway: bee hotels are filling up and garden roses are perhaps bearing leaves with neat semi-circular holes! While Leafcutter bees are more difficult to identify to species, female Patchwork Leafcutter bees are one of the most distinctive. Females of Patchwork Leafcutter bees have orange pollen-collecting hairs on their underside that extend right to their tip, unlike other species. From above these orange hairs appear as a ‘halo’ around the abdomen of the female. Females also have particularly defined white bands on the sides of their abdomens. Note though that the colour of pollen-collecting hairs can be covered by pollen that females have collected! 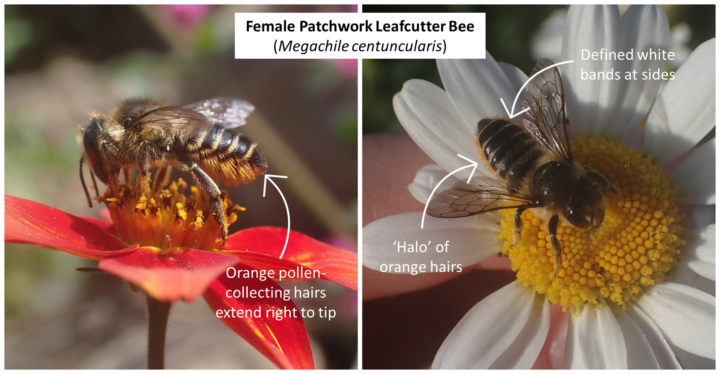 A smaller bee hotel resident is the Blue Mason Bee. Females characteristically line their nests with pesto-like leaf mastic. While small, their heads appear oversized and box-shaped. The body has a bluey sheen with pale hair bands on the sides of the abdomen. Females have black pollen-collecting hairs on their underside, but again this can be obscured if females have been collecting pollen! 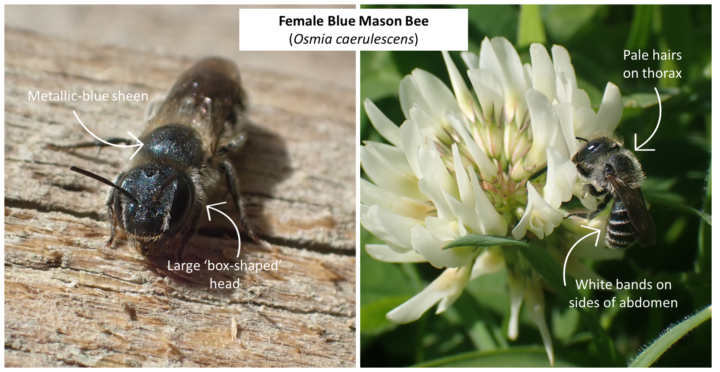 A huge thank you to all Bee Hunt participants who are sharing and submitting their bee sightings. If you have sighted a bee and are unsure on its identification, try this bumblebee crib sheet by the Bumblebee Conservation Trust and the online photo guide by leading bee expert Steven Falk. Please do also get in contact with us via nhsn@ncl.ac.uk or social media, and the NHSN Bee Team will try their best to help. Collectively, we can build a greater understanding of where bees are and how they are doing in the region.