A huge ‘thank you’ to everyone who has taken part in the North East Bee Hunt so far. Your records are helping fill the gaps and increase our collective knowledge of bees in our region.

In the first of a new series of fortnightly North East Bee Hunt updates, Charlotte Rankin summarises the data submitted so far and shares some of your bee photography.

A total of 92 records from 34 participants have been submitted to The North East Bee Hunt since launching just over two weeks ago. Four of our five target bee species have been sighted: the Tree Bumblebee, Red-tailed Bumblebee, Tawny Mining Bee and Red Mason Bee. A further seven bee species have also been submitted to the scheme, including the Buffish Mining Bee and Hairy-footed Flower Bee. Records have been submitted from all three vice-counties, stretching from Bamburgh to further down south in Darlington. The most recorded target species so far is the Tree Bumblebee (36 records), followed by the Tawny Mining Bee (21 records), Red-tailed Bumblebee (13 records) and the Red Mason Bee (4 records). The map below displays the 2km squares in which we have received records of bees through the North East Bee Hunt.

Making up most of the records so far, the queen Tree Bumblebees are out in force and are currently searching for a place to start a nest. We have also received our firs 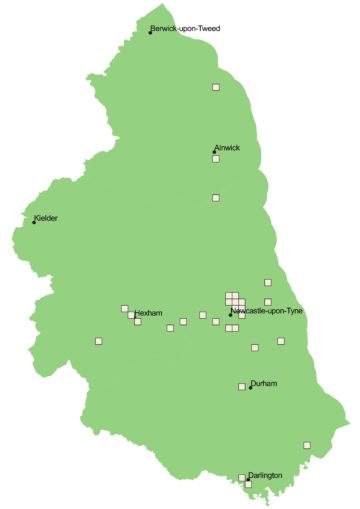 t sighting of a worker Tree Bumblebee, a sign of success for the braver queens who emerged back in February. While receiving fewer records, queen Red-tailed Bumblebees are also on the hunt for a place to start their nests. Over the next few weeks, we will see more worker bumblebees on the wing once queens have established a place to nest.

More recently, we have received an influx of Tawny Mining Bee records. Encouraged by the recent warmer weather, males and females are now on the wing and females are beginning to dig their nest burrows. Keep a lookout for their distinctive volcano-like nest mounds in your garden lawns or flowerbeds. We have also received three records of male Red Mason Bees. Males emerge a bit earlier than the females and linger around nests waiting for females to emerge. If you have a bee hotel, it is worth keeping your eyes peeled for Red Mason Bees emerging or for females inspecting a tube to nest in. If your bee hotel has tubes filled with mud, it is a sure sign that Red Mason Bees are occupying your bee hotel.

So far, no records of Ashy Mining Bees have been submitted. Like Tawny Mining Bees, these bees nest in the ground and can pay a visit to your garden. Keep a lookout for these distinctive black and ashy bees nesting in bare or sparsely vegetated ground.

Please continue to submit your bee records to the North East Bee Hunt. Records of additional species are also welcome.