Home Birds The impact of bad weather on bird life in the North-East, March-April 2018

A recent weather incident report on the subject of beached birds, published by Daniel M Turner, NEBBS Group Coordinator, has highlighted the negative impact of bad weather throughout March on birdlife in the North East. With conditions through the month ranging from gale-force winds and persistent snow to rain, sleet and occasional pleasant spells, it has been changeable month, with conditions having a pronounced impact the regions wildlife – as demonstrated by the diversity of species and total number of corpses reported NEBBS throughout the period. Guillemots were particularly hard hit by the weather with a total of 439 beached birds reported; though high numbers of Puffin, Razorbill and Kittiwake point towards a difficult month for the regions seabirds. They were, however, far from alone in this regard as highlighted in the report report.

NEBBS are a voluntary group initiated during 2003 and composed of a core of keen regular beach surveyors. Their members are interested in birds, the wider environment, pollution of marine ecosystems and ways by which to improve the health of the maritime environment with an emphasis on the North Sea. The main method by which they monitor beached birds entails regular monthly checks of agreed stretches of coastline. If you would like to help NEBBS carry out beach surveys, please contact the Northeast England coordinator. To give beginners an idea of how and what to record you can view three completed example forms on the NHSN website here. 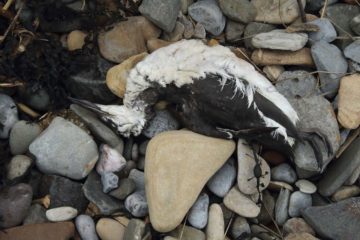