At the moment, many of us are spending a considerable amount of time in our own homes. If you are lucky enough to have a garden and are looking for something novel to do why not try your hand at taming a Robin or two!

‘Individuality in Birds: A Study of Robins’

Searching through scans of archival documents on my computer, I came across six pages of typescript from the typewriter of the respected local North East Ornithologist, George W Temperley. Entitled ‘Individuality in Birds: A Study of Robins’, and dated April 1961, the unfinished notes discuss the habits of the robins in his garden at Restharrow, Stocksfield, Northumberland.

Temperley relates how the robins differed widely in behaviour. He remarks that, ‘individual birds have a decided character of their own…’, a conclusion made from spending hours observing the resident population and ultimately attempting to tame them with food offerings.

His method of taming the robins involved a tin of mealworms, which he placed by his feet to begin with slowly raising the tin to his hand until the robins were brave enough to perch on his fingers.

This was a trick he had learned from his friend Sir Edward Grey (1862-1933), an eminent politician and President of the Natural History Society of Northumberland, Durham and Newcastle upon Tyne from 1924-33.

“When visiting ‘Fallodon’, I had watched the late Viscount Grey feeding his robins from a tin of meal-worms which he held in his hand. He explained to me that the robins associated food with the tin; that he had begun by placing the tin on the ground until the birds were quite used to it; then, by putting his hand nearer and nearer to the tin he had accustomed them to his presence and finally they had come to feed from the tin when it was in the palm of his hand.”

Temperley eventually tamed a bird he called Robert of Restharrow. Robert would also take food from Temperley’s mouth, not something we would advocate today, but because of this the bird became a celebrity.

“He was the first robin I had yet met who would approach an active spade so closely; and in this, our first interview, he was soon taking worms from my fingers.”

“…he soon became a favourite study for nature photographers, until he developed a disconcerting habit of flying on to the top of the camera at critical moments.”

Within these few pages, Temperley’s account of the behaviour of Robert, and another robin he calls the ‘Usurper’, towards himself and to each other is an interesting observation but sadly a robin’s average life expectancy is approximately 1.1 years and the inevitable happens.

“Alas! The lives of robins are short and during a spell of Wintry weather first the Usurper and then Robert were reported ‘missing’ and were ‘presumed dead’; so that my studies had at least temporarily, come to an end.”

Temperley carried on with his study and the training of his robins, every year recruiting a new bird to be Robert of Restharrow, his faithful garden companion.

Read the full typescript of Temperley’s notes (PDF). It may inspire you to monitor your own robins, most gardens and parks have a resident pair, or why not attempt the tin of mealworms as an enticement approach. It takes some patience but we may have some time on our hands to observe nature at the moment. 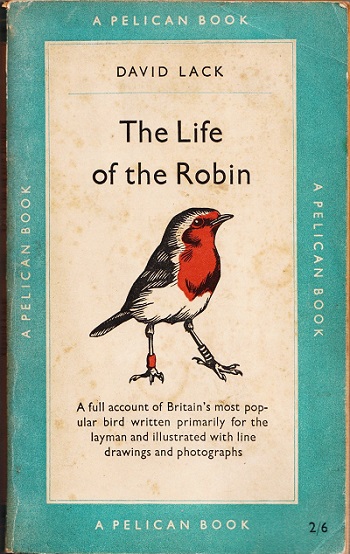 The Life of the Robin

To learn more about robins, why not find a copy of The Life of the Robin, by David Lack, first published in 1943.

Read interesting reviews of the book on culture blog, The Dabbler, and by Mark Avery, writer and environmental campaigner.

George William Temperley (1875-1967), North East Botanist and Ornithologist, served as the Joint Secretary of the Natural History Society of Northumbria from 1931-1951.

To learn more, see George W. Temperley – His Life, an excellent biography of his life and work, created as part of the Birds of Durham Heritage Project.

Thank you to Anne Wilson for the typescript.