A warm mid-October day gave the lad and I the chance to pack a picnic on the bikes and head out for a quick spin through Denton Dene, a wooded Local Nature Reserve bounded by the A1 on the western edge of Newcastle.

Adrenalized from a white-knuckle descent of Westgate Road, the hot sun encouraged to us imagine a dusty Roman legion marching along Hadrian’s Wall, a fragment of which still lies adjacent to the roadside, squeezed beside a tyre garage. The Wall marks one of the entry points to the Dene, with an initially grassy descent then grading into woodland. Immediately, we were shaded and insulated from playground and traffic noise by the mature oaks on the western fringe of the Dene.

Descending further on two wheels, the lad stopped in a glade, eyes caught by a grey squirrel on a tree base. We chatted about the relatively recent loss of red squirrels from this edge of the city, a sadness I feel but he doesn’t as he enjoys watching either species of squirrel. As the descent continued, the path continued through a more mixed woodland. A raucous cry of a buzzard stopped me dead with surprise. The bird had been perched in an ivy-covered tree next to the path and was now being mobbed by magpies in low flight through the trees. Our journey continued, with a path spitting us out in to the grassy, open guts of the dene. We dismounted, rather startled by the sun’s heat and the picnic commenced. As sandwich boxes were unpacked, two buzzards slow circled over us, drifting higher and higher until lost from view. Back on earth, a party of magpies gathered around a car recently parked on the grass. They began to pick at the car tyres and poked their heads in to the wheel arches. Despite investigating after their departure, we couldn’t figure out what they were hunting for. At this point, a school group arrived to pond dip in a section of the Dene we missed and our journey home began, following another section of Hadrian’s Cycleway route back east into the city.

The Friends of Denton Dene community group have produced an excellent heritage guide and map which can be found in local libraries in West Denton and Denton Burn. 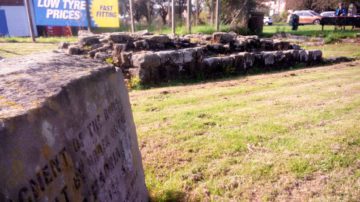