If you see a small gingery and stripey bee on Oxeye Daisy in the height of summer, it is most likely a Colletes bee. A group of solitary bees also known as ‘Plasterer Bees’, their common name refers to the females who secrete a cellophane-like material to line their nest cells. This clever craft provides their eggs with protection from rain and other dangerous intruders such as fungi.

Females nest in burrows in the ground, typically light and often sandy soils. While solitary, some species can form large nesting aggregations, and these are often spotted due to the swarm of males whizzing around in search for mates. Like most bees, females collect pollen on their hind legs. Within each nest cell, an egg is provisioned with a liquid mix of nectar and pollen. Protected by a waterproof layer, her offspring develop within their nest cells and emerge as adults in the following year.

As Colletes are short-tongued bees, you will most likely find them on more open flowers. Most are later-flying species and females collect pollen from a narrow range of plant species such as those of the Daisy family (Asteraceae), Heather (Heather Colletes, Colletes succinctus) and Ivy (Ivy Bee, Colletes hederae).

Colletes bees are distinguished by their gingery-brown thorax, pale-banded abdomen and a tapered or ‘heart-shaped’ face. Identification to species requires closer examination, though habitat and forage plant can provide a clue as to who it might be. 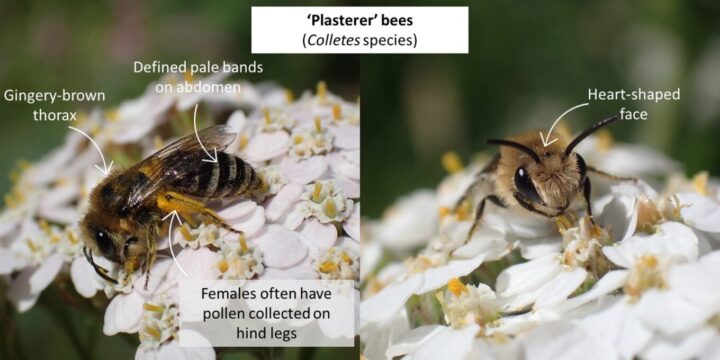 Species to look out for

The species you are most likely to find in urban areas and gardens is Davies’ Colletes, Colletes daviesanus. The Heather Colletes Bee (Colletes succinctus) can be found foraging on Heather at heathland sites in Northumberland and the North Pennines.

A recent arrival to Britain, the Ivy Bee (Colletes hederae) flies from late August to November. As its name suggests, this species forages almost exclusively on Ivy and can be found where there is plentiful Ivy. First recorded in the UK in 2011, this species has since spread over southern England, Wales and further north in more recent years. In the North East, the first confirmed sighting was reported last Autumn in Whitburn (South Tyneside). So keep an eye out this Autumn where there is flowering Ivy!

Thank you again to everyone who has taken part in the North East Bee Hunt. Your records are bringing to light new information about the North East’s bees and have now taken us to an outstanding 1900 records!