In a year where work was impacted on so many other reserves due to the Covid-19 pandemic, Coquet’s small team and isolation from the mainland enabled work to continue relatively unhindered. A few of the annual monitoring tasks had to be dropped, but fortunately work with key species such as Roseate Terns was able to continue as normal, whilst still ensuring social distancing. Early March began in much the same way as other seasons as Covid-19 hadn’t yet taken hold in this country. 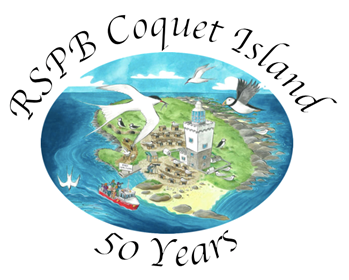 Early in March, Coquet hosted three fencing contractors who installed a permanent electric mesh fence around the Roseate Tern terraces to safeguard the colony on the island from mammalian predators. This new fence was deemed necessary after last season’s otter incursion although, fortunately, this year we had no evidence of the animal returning to the island. The fencers left the island on 9 March with the Assistant Warden and single volunteer leaving on 14 March. In the following days, new restrictions were put in place by the RSPB because of the virus.

With the situation changing all the time, all volunteering across the RSPB was suspended and reserves closed. Special dispensation was given to resume work on Coquet, due to its isolation from the mainland, and self-isolation measures put in place for the staff. A reduced team returned on 7 April, enabling social-distancing and the labour-intensive work of managing and protecting a reserve which boasts the only colony of the UK’s rarest nesting seabird.

2020 marks the 50th anniversary of the RSPB taking over management of Coquet Island, thanks to pioneering efforts of the Natural History Society. It’s amazing to think what has been achieved in those 50 years, with species now nesting on the island which had never nested before and others increasing dramatically in number. The weather this summer hasn’t been brilliant and it’s definitely had an effect on Coquet’s residents. However, seabirds are amazingly resilient and despite productivities for some species not reaching the highs of previous seasons, they’ve still done pretty well.

As this season also marks the final year of the EU funded Roseate Tern LIFE Programme, it feels right to start with our rosys as they have once again broken the population record for the island (since the RSPB took over management in 1970). 130 pairs nested this season which comfortably beat the previous record of 122 set last year. However, the very unsettled weather in June and continuing into July definitely impacted the birds and, very sadly, we lost around half of all ‘B’ chicks. Despite losing these youngsters, the nest boxes definitely helped in the wild conditions and 122 chicks still successfully fledged from the island.

For a Roseate Tern highlights video from this season, watch here. 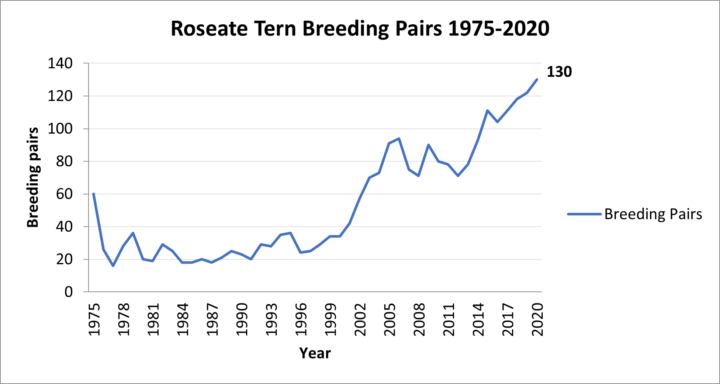 Typically, Roseates will lay a single or two-egg clutch as they are slightly larger than the eggs for Arctic and Common Terns. However, this season we had a number of birds lay clutches of three and we even found four eggs in a nest box on one of our visits to the nesting terraces. This clutch of four is likely to be laid by two females in the same box, but unfortunately, it was too big of an area to incubate effectively so the eggs didn’t hatch.

As for the other species on the island, we’ll begin with the sadder news so as to end on a high. Eiders have really struggled for another season, with low numbers of nesting females and bad weather coming at the very worst time (like last year!) decimating duckling crèches. Arctic and Common Terns also struggled in the unsettled weather giving relatively low productivities for each species. The impact of the weather on these other tern species just highlights the importance of the nest boxes for the Roseates which give the youngsters that much more protection from the elements. Sandwich Terns appeared to fair better, possibly due to being a larger tern species with differing foraging habits. 1,669 pairs nested this year and for a few weeks we were seeing large numbers of youngsters successfully fledging from the colony onto Coquet’s beach.

Our Kittiwakes were also record-breakers this season with the highest population recorded on the island ever. Kittiwakes are more commonly associated with the taller cliffs of the nearby Farne Islands but despite their small stature on Coquet, an impressive 453 Kittiwakes nested around the island this season. This is a fantastic result, not least because the first pair only nested on the island in 1991! Kittiwakes also had a good season for productivity this season, possibly due to being better able to cope with the unseasonable conditions over the summer. Fulmars also definitely deserve a mention as despite being the least numerous nesting seabird on the island, an impressive 61 pairs nested this season which is significantly up on last year’s figure. Productivity was also the second-highest it’s been since the mid-80s which was a wonderful result as typically less than half of pairs are successful. 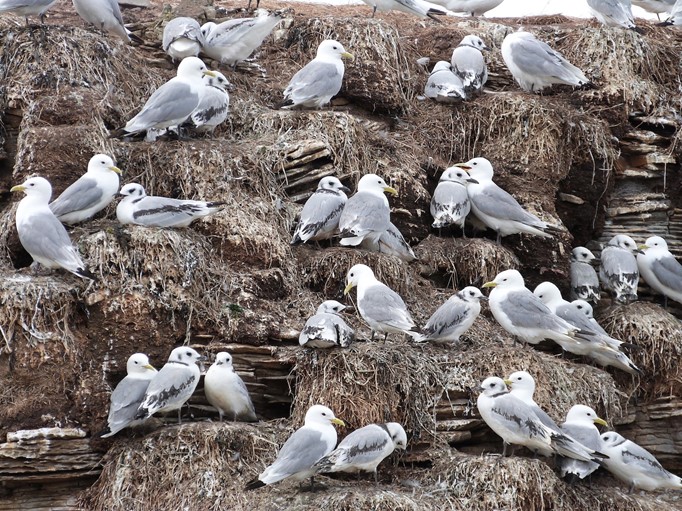 And finally, 2020 wasn’t a census year for our Puffins and due to the difficulty of maintaining social distancing whilst monitoring the colony, it wouldn’t have been possible anyway. However, numbers appeared very healthy and we have even noticed burrows appearing in new areas to the South of the island suggesting that the colony is expanding. However……we were able to help Puffin Books (the children’s imprint of Penguin Books) celebrate their 80th anniversary this year by creating our very own ‘Puffin Library’ on the Island. The library quickly became a favourite perching point for the birds who are always drawn to higher areas to scan out to sea from. 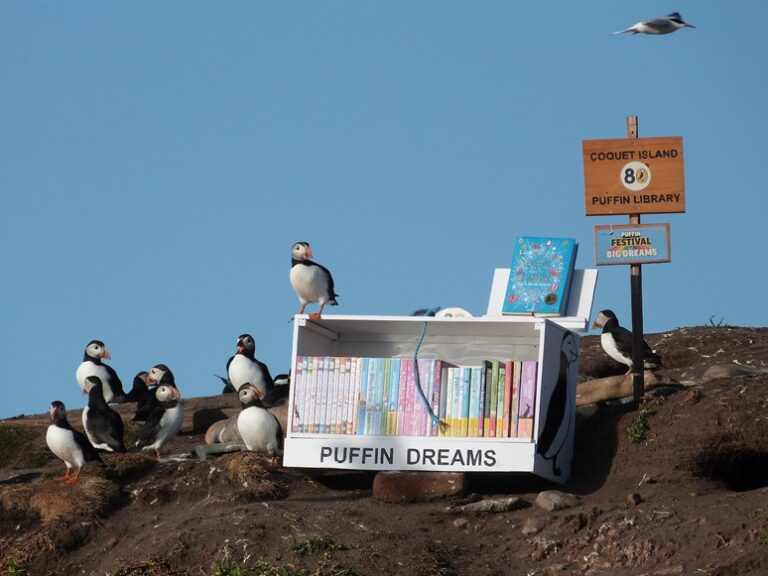 A glimpse at the birdlife of Allen Banks