Whilst taking part in the North East Bee Hunt, learn a thing or two about the five species at the heart of the project in a new series of blog posts by an entomologist, Charlotte Rankin. For the third instalment in the series, find about more about the distinctive Ashy Mining Bee (Adrena cineraria).

Ashy Mining Bees are early-flying solitary bees on the wing from March through to June. Females are one of our most distinctive solitary bees, with a black coat and two broad ash-coloured bands on their thorax. Males are smaller, with more extensive ashy hairs on their thorax and longer antennae.

Ashy Mining Bees are ground-nesters, typically nesting in short turf or bare ground. As the name suggests, females dig into the ground to create their nest burrows. Females excavate a considerable amount of material and have been reported to excavate tunnels upto a depth of 20cm. This excavated material builds up around the nest entrance to form distinctive volcano-like mounds, a characteristic feature of mining bees.

This species appears in spring, with males emerging a couple of weeks before the females. Once mated, females will set to work on their nest burrows while males soon die after mating. While solitary, females can be found nesting close together and can form very large nesting aggregations.

A nest burrow consists of cells, each with an egg provisioned with pollen. Once a cell is completed, it is lined and waterproofed with a waxy substance. Females continue to lay eggs until the end of their lifespan, which is typically no longer than a couple of months after emergence.

At the end of foraging trips and during disturbance such as rain, females close the entrance to their nests. However, leaving their nests open and unoccupied provides an opportunity for intruders. One such intruder is a species of ‘cuckoo bee’ (Scientific name: Nomada lathburiana). Cuckoo females enter unoccupied nests of Ashy Mining Bees and lay their own eggs within. The cuckoo’s larvae feeds upon the contents, including the egg or larvae of the Ashy Mining Bee.

The Ashy Mining Bee frequents a variety of habitats and can be found in urban settings such as parks, cemeteries and gardens. A great range of flowering plants are visited for nectar and pollen. Pollen is carried back to the nest on the female’s hind legs and often extensively covers the legs. Provisioned with pollen, the female’s offspring develop and overwinter within their cells. Emerging as adults in the following spring, the cycle starts again.

Don’t forget to log your sightings of Ashy Mining Bee (or any of the species included in the scheme). By doing so, you not only plug the gaps in our knowledge about the North East’s under-recorded bees but actively help inform the conservation of these important invertebrates. Record your sightings here.

How to identify Ashy Mining Bee? 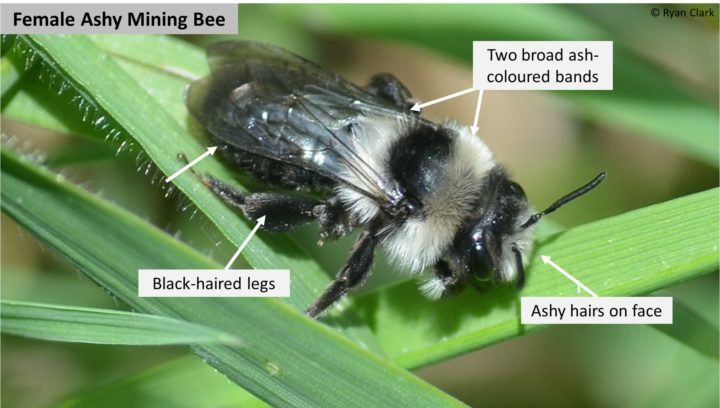 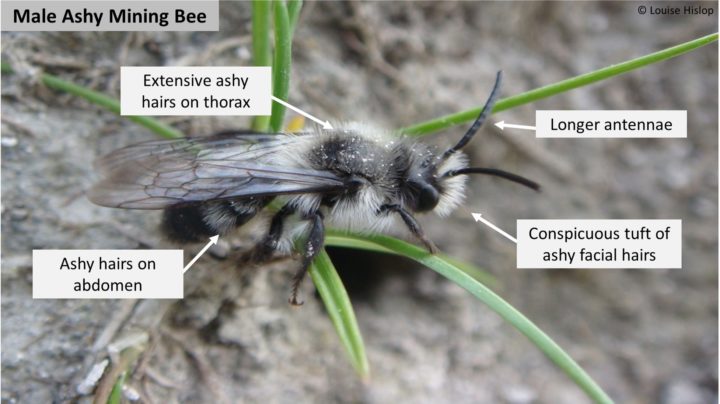