Whilst taking part in the North East Bee Hunt, learn a thing or two about the five species at the heart of the project in a new series of blog posts by an entomologist, Charlotte Rankin. For the fourth instalment in the series, find about more about the Tawny Mining Bee (Adrena fulva).

Tawny Mining Bees are a spring-flying species of solitary bee, seen on the wing from March through to June. Females are one of our most distinctive solitary bees with furry, fox-coloured coats. Their scientific name “fulva” comes from the Latin for ‘tawny’. Males are very different from the females and are less distinctive. This species is a common resident of urban areas and can be found nesting in garden lawns and parks.

As their name suggests, Tawny Mining Bees excavate or ‘mine’ into the earth to create their nest burrows. This results in a characteristic volcano-like appearance, with their nest entrances surrounded by a spoil of material. Nesting sites typically include footpaths, sparsely vegetated ground, lawns and even flowerbeds. While solitary, females will nest close together in suitable places to form aggregations.

Males emerge earlier than females and, with their sole purpose to find a mate, they spend much of their time hovering outside nest entrances waiting for females to emerge. Once a mated female has excavated her burrow, she will set to work on creating a series of nest cells. Each cell contains an egg provisioned with pollen and lined with a layer of waterproof, waxy material.

This species is found in a great variety of habitats and spring-flowering shrubs are important sources of nectar and pollen. Females collect pollen on their hind legs and often covers most of their hind legs. Females continue to lay eggs until the end of their lifespan, which is typically no longer than a couple of months after emergence. Within the newly crafted nest cells, the female’s offspring will develop and emerge as adults in the following spring.

As these solitary bees readily nest in lawns, it is worth keeping an eye out for their volcano-like turrets in your garden and local parks!

Don’t forget to log your sightings of Tawny Mining Bee (or any of the species included in the scheme). By doing so, you not only plug the gaps in our knowledge about the North East’s under-recorded bees but actively help inform the conservation of these important invertebrates. Record your sightings here.

How to identify Tawny Mining Bee? 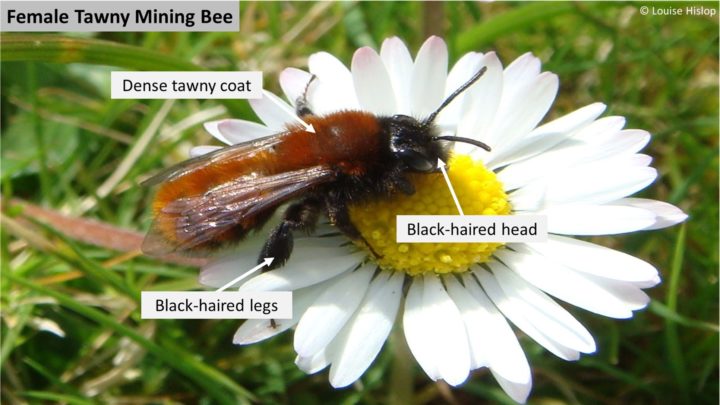 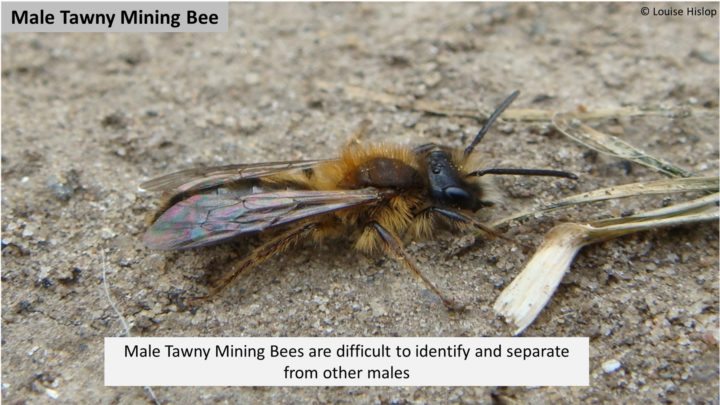