Home Invertebrates Spring on the Spetchells

Created as a by-product of factory work during World War two, the Spetchells at Prudhoe represents the only example of a chalk dominated habitat in Northumberland. They are a fantastic local site at which to observe and enjoy a diverse range of wildlife, including many species of bee.

Local entomologist, Rinke Vinkenoog provides an account of the unfolding spring at the Spetchells, highlighting the wildlife you can enjoy at this remarkable and very special location.

My first visit since the lockdown started, luckily I live so close that I can fit this in my daily walk. The first Mining Bees have appeared: both Buffish and Ashy Mining Bees (Andrena nigroaenea and A. cineraria). There are only a handful of each, all male.

This is a good year for one of my favourite pollinators: the Greater Bee Fly (Bombylius major) is present in good numbers. I count no less than 12 on just a few square yards, foraging on Coltsfoot. There are not so many on the Spetchells; they seem to prefer the more lush vegetation at the foot of the chalk hills.

In just one week, the Buffish Mining Bees have exploded! Whole clouds are hovering around the Gorse and low over the vegetation. Upon examination they are all males, no doubt eagerly waiting for the females to emerge. There are no nesting holes to be seen yet. The Buffish Mining Bee is by far the most abundant, but there are Ashy, Tawny (A. fulva) and Orange-tailed Mining Bees (A. haemorrhoa) as well. A very rough count of the patrolling bees comes to a density of 10-15 per square meter. On the Western Spetchells alone, that would amount to well over 100,000 bees.

The first females have emerged. They are not in for an easy time: “mating balls” of Mining Bees are rolling all over the chalk, with several males trying to get hold of a single female. I find a few females left completely dazed and unable to fly away. If you are on a Quest for Romance, don’t try to find it in the Realm of the Mining Bees…

The number of nesting holes is increasing now. Where there are nests, there are parasites: several Nomad bees are around, foraging on dandelion. Gooden’s Nomad Bee (Nomada goodeniana) is common, but there are others as well – by the look of it, Panzer’s Nomad Bee (N. panzeri). These beautiful wasp-like bees will parasitise Mining Bee nests.

King’s Day! We celebrate the birthday of King Willem Alexander of the Netherlands. Completely in Royal Style, at the Spetchellls I am welcomed by a Queen of the Gypsy Cuckoo Bee (Bombus bohemicus), and to top it up by an Orange-tip butterfly (Anthocharis cardamines). Several of the female Buffish Mining Bees are carrying pollen on their hind legs now. It’s yellow pollen though… not orange. Ah well, you can’t have it all.

Below the Spetchells clouds of St Mark’s fly (Bibio marci) are present in glades and around Hawthorn trees, instantly recognisable by their long hind legs that dangle below them in flight. Good timing; St Mark’s day was just two days ago (25 April).

Tuesday 5 and Thursday 7 May

My first “official” monitoring session of the season on the Spetchells, trying to establish the different interactions between flowers and pollinators. Unsurprisingly, most of the flower visitors here are Mining Bees – after all, they are the most abundant insects here. Yet, I am puzzled. With so many Mining Bees, and with the females having to collect loads of pollen for their offspring, one would expect a frenzy of feeding on the flowers available. That is not happening, however: we see some Mining Bees on Hawthorn, Gorse, Daisy, and Dandelion but their numbers are low. That leaves the question… where do the others go? Are they foraging off the Spetchells, or out of sight in the canopy? I take some pollen samples from hind legs to find out.

Though still plentiful, the number of Mining Bees seems to decrease already. The same is true for the St Mark’s flies; their time is nearly done.

The Hawthorn on my Spetchells field is starting to flower. Several Mining Bees, both Buffish and Tawny, are visiting – not the flowers, but the buds! They stand over a bud, and seem to manipulate it with their front legs. Why? What are they doing? I can’t find damage to the buds afterwards. Does anybody know what this behaviour means?

Down by the river the Greater Bee fly is less common now, but another long-snouted cousin has taken its place: the hoverfly Rhingia campestris. With its large rostrum this syrphid is unmistakable. It is foraging on White Dead Nettle; it is amazing to see how the enormous proboscis is used to access the nectar. Apparently this insect has got the English name “Heineken Fly”? As a Dutchman I should be proud – however, as I was born next to the Amstel Brewery I got a conflict of loyalty now…

It’s “âlde maaie” today, the day that in Friesland the farm contracts were ended and renewed. I say a blessing to my great-great-grandparents Antje and Ite who celebrate their 147th wedding anniversary today.

Spring is in the air on the Spetchells as well. Blackcaps and Willow Warblers, finally back, are singing and the Sand martins have also returned to their colony. Our Hawthorn is now in full bloom. Several species of Mining Bee are foraging, but again – in small numbers. Where oh where do they collect their pollen…?

The warmest day of the year thus far, and gorgeous weather for a nice walk to the Spetchells. At the foot of the hills, I am welcomed by singing Whitethroats; they seem to be present in good numbers here.

Most of the Buffish Mining Bees returning to the nest carry bright yellow pollen, some however have pollen that is decidedly of a lighter colour. I take some samples of both to analyse under the microscope later.

Though more and more plants come in flower, all seems very quiet indeed on the bee-front: a single Red-tailed bumblebee is the sole flower visitor today. Is it too warm? But summer still has to start? 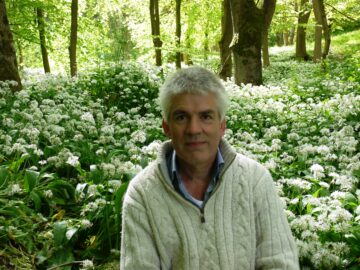 Rinke Vinkenoog is a Biology lecturer at Northumbria University who lives in Prudhoe. From there his walks regularly take him to the chalk hills of the Spetchells.