Historically, this species has always been considered rare in the North East; the late 20th century saw the beginning of a marked increase in numbers of the Red-tailed or Hill Cuckoo Bee in its southern range, which, since 2004, has extended into Durham and Northumberland.

Females are very large with the largest average wingspan of any bumblebee and, being black with an orange-red tail, look very like the queen of the Red-tailed Bumblebee Bombus lapidarius; however, the Red-tailed Bumblebee queen has a denser body pile, clearer wings, a smaller head capsule, and pollen baskets on the hind tibia. Conversely, the female Red-tailed Cuckoo Bee has a simple and densely haired tibia. Males are very variable but are the only cuckoo bumblebees with an extensively red-haired tail.

A late-emerging species with females appearing in May or June; males and new females appear in July. Females go into hibernation before the end of August, whereas males may continue till mid- September. Males sometimes form lekking swarms on grassy hillsides, which may be the source of its older name of Hill Cuckoo Bee. The Red-tailed Cuckoo Bee is the specific social parasite of the Red-tailed Bumblebee, but is not as widely distributed as the host. Females will seek out and usurp the nests of the host species, destroying or evicting the queen Red-tailed Bumblebee and replacing her eggs with the cuckoo eggs. Subsequently, all the work of rearing the young cuckoo bees is done by the host workers (Benton, 2006). The species occupies a wide range of habitats including woodland, open, rural and urban locations and will obtain nectar from a wide range of flowering wild and garden plants.

Before 2004 there were only a few records in the two counties; since that date, the species has become more common. There is however a wide geographical split in the current distribution of this species with populations expanding in North Northumberland and in County Durham. Whether the paucity of records in South Northumberland is due to species absence or lack of recording effort remains to be tested. Nationally, the Red-tailed Cuckoo bee is widespread in the southern half of the UK and is spreading northwards. It is a Eurasian species.

History in the North East

First collected and recorded by T. Bold between 1854 and 1870 as Apathus rupestris and described as somewhat rare, and taken at Sunderland, Marsden, Little Benton and Long Benton. V. Perkins (1862) recorded it, under the same name, as common near Newcastle upon Tyne, but he is the only recorder to do so, history suggesting that he was in error. Half a century later in 1923, J.W. Heslop-Harrison described it as having escaped notice since Bold’s time, evidencing an actual absence rather than lack of recording by the fact that C. Robson had not noticed it; however, Heslop-Harrison had failed to note that J. Ruxton had taken a specimen at Shotley Bridge in 1921. Heslop-Harrison records it as Psithyrus rupestris at Birtley in 1923, in 1924 he extended the locations to include Hexham. The Red Data Book for Northumberland (Kerslake, 1998) considers the species to be extinct in Northumberland after this date. In 1926 and 1927, Ruxton recorded taking a few females near Shotley Bridge and, finally, Heslop-Harrison reported a new locality at Ravensworth in 1955. This record is included in the Regional Review of Rare and Notable Invertebrates in North East England (Ball, 1987) where it is described as the least common British Cuckoo Bee. Half a century later and the species was recorded, as Bombus rupestris, by S. Hackett in 2004, south of Wooler on The Dod in North Northumberland.

In 2009, J. Burn recorded the species from Waldridge Fell near Chester le Street in County Durham. Although still a rare bumblebee, the last ten years has seen the species increase its distribution sparsely across Durham and North Northumberland.

In line with the national increase in abundance and distribution, the Red-tailed Cuckoo Bee is currently increasing its distribution within the region. 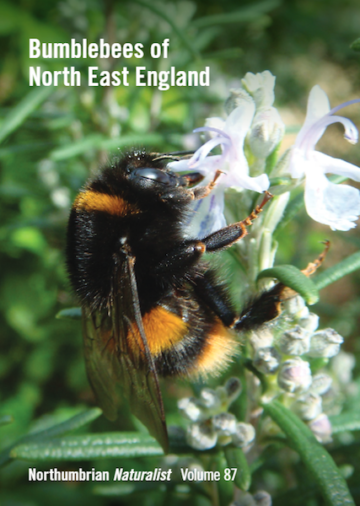 This post is an extract from version NHSN’s recent publication, Bumblebees of North East England.

Members can view this issue now

Non-members can pick-up a digital copy of the publication for just £4.00