To coincide with the launch of the North East Bee Hunt, we wanted to provide more information about five bees at the heart of the scheme. For the first in a new series of blog posts from the NHSN bee group, Charlotte Rankin introduces seemingly common, yet under-recorded Red-tailed Bumblebee (Bombus lapidarius).

One of the most common and widespread bees in the UK, this species is found in a great variety of habitats and is a regular garden visitor. As their name suggests, Red-tailed bumblebees have prominent red tails that cover one-quarter of their abdomen. Queens have jet-black bodies with a red tail and workers resemble small queens. Males have yellow-haired bands on their head and midriff, with a distinctive yellow ‘moustache’ on their face.  Albany Hancock was the first to record this species in the North East in 1827.

One of the first bees to be seen in the year, queens typically emerge from hibernation in March. Queens establish their nests in underground cavities such as old mammal burrows and sometimes amongst piles of rubble. The Latin name (‘lapidarius’: of or related to stone) is derived from the species’ tendency to nest under stones, which today also includes patio slabs.

Nests can be very large with up to 300 female workers and can persist for three to four months. The workers look after their developing siblings and collect nectar and pollen to bring back to the nest. Queens and workers collect pollen on their hind legs in specialised ‘pollen baskets’. As common and widespread species, Red-tailed bumblebees visit a great variety of flowering plants for nectar and pollen.

Towards the end of the nest’s life, the queen switches to the production of males and new queens. Once mated, new queens enter hibernation until the following spring, or in the south, may establish a later season nest. By this point, the old nest has naturally died away along with the males.

Don’t forget to log your sightings of Red-tailed Bumblebee (or any of the species included in the scheme). By doing so, you help inform the conservation of these important invertebrates. Record your sightings here.

Unsure what to look for?

These annotated images, created to help you, highlight the key features of both male and female Red-tailed Bumblebees. 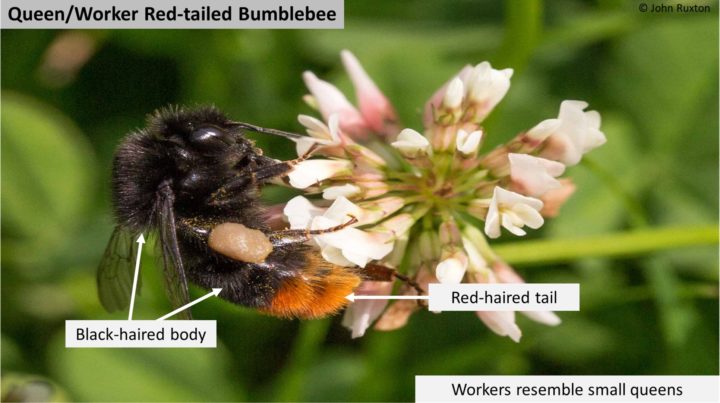 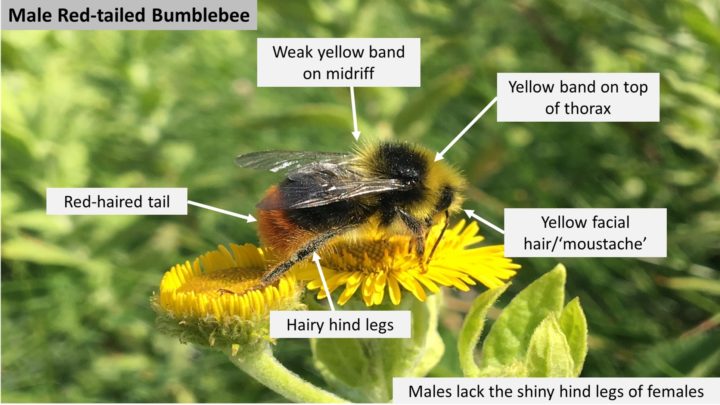